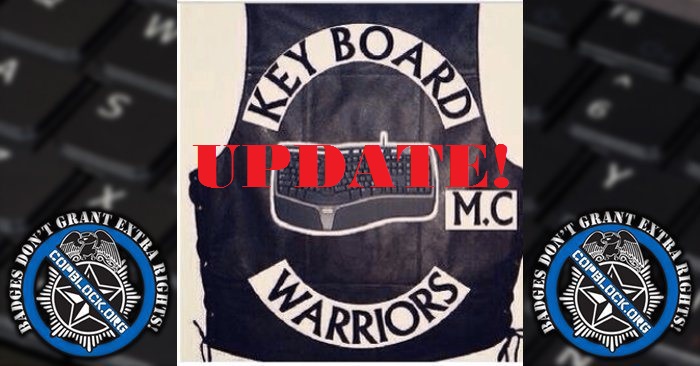 Update to Death Threat From a Cop Supporter

This week I shared with you a story of three individuals that decided to do something so reckless, dumb, and criminal to me because of my activities as a Cop Blocker.  Some cop supporters thought it would be fun to threaten me and publish my personal information.  Whether the threats were real or they were trying to get a rise out of me; which they did, their actions couldn’t have been any more stupid.

Today, Chad Hale sent me a private message on Facebook that included his phone number.  I know what you’re thinking and no I am not giving that information out.  Regardless of what you think of me for my activism, I’m a civilized person and will not sink to their level.  Chad claimed that he just wants to talk, but after witnessing his actions over the past week, I doubt an olive branch is what he really wants to extend to me.

He claims to want to apologize and have a rational conversation.  Rational?  Chad has already demonstrated that there is nothing rational in his thinking or behavior.  I’m not interested in his apology or to sit down and share a cup of hot chocolate with him.  That train left the station the moment he hit send and published my info on Facebook.  I’m interested in him and the other two troglodytes leaving me alone. You will see in the second screen shot that he goes from being apologetic to accusing me of threatening his life and threatening to burn his house down.  I can assure you that no such thing occurred.  I’m a decent human being that doesn’t see any value in resorting to violence to make my point.  I have a good job, a nice home that I bought on my own, and I love my freedom too much to risk all of that.

Let’s set all the legalities of what they did aside for a moment and focus on something else.  Aside from not breaking the “law”, there are just some things that decent civilized people do not do.  Decent humans don’t send death threats to someone they don’t know and whom have not caused you any harm.  In a truly civilized society, when there is something that people disagree on, they talk about them and work to resolve any conflict without the need to threaten violence.

To dispel any belief that this guy was even remotely sincere in wanting to work things out, he turned around and deleted the chat, but not before I screen grabbed everything.  He’s only sorry because he got called out and exposed for the sorry excuse for a human that he truly is.  These are the types of people who defend dirty cops.  They’re scared of the truth and will use any means at their disposal to try to silence those that want accountability.

Cop apologists like to use the same line all of the time when they attack us, “If you don’t want to get beat down or arrested, don’t break the law.”  Well, in this instance, if you don’t want your criminal activities exposed for the world to see, think before you act out.  Don’t send blatant threats of murder or publish someone’s personal information on the internet in an attempt to cause harm.

To effectively deal with a bully of any sort; you do what we do with bully cops on a daily basis, you expose their deeds for everyone to see.  You bring the truth out in the open and leave them defenseless and with no way to hide from it.  As far as a future course of action against these three other than consulting with my attorney, I have yet to decide on my next step in dealing with these three.