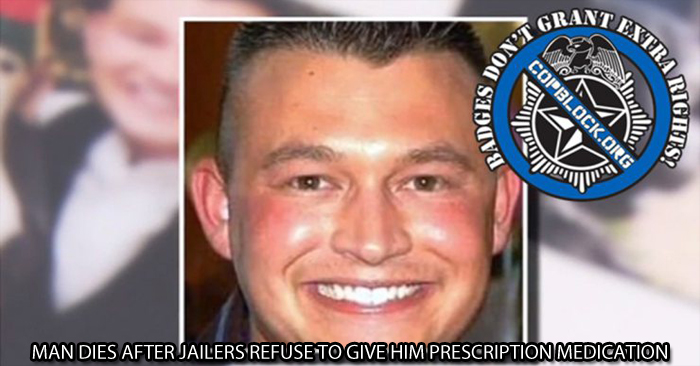 Parents of a Texas man who died while in custody of the Galveston County jail earlier this year are speaking out.

32-year-old Jesse Jacobs plead guilty to a DWI on March 6 and was sentenced to 30 days in jail as part of a plea deal before suffering a seizure due to being refused his prescription medication on March 12.

Jacobs had been prescribed the benzodiazepine Xanax, which he’d taken for over a decade to treat anxiety.

“Benzos,” as they are called, are used to treat a myriad of panic and anxiety disorders – as well as seizures – and are particularly dangerous because the abrupt end of their extended use can result in death.

Psychology Today points out that “withdrawal from extended use of benzodiaepines can kill:”

Whether Xanax (alprazolam), Ativan (lorazepam), Valium (diazepam) or other variations, long term use of benzodiazepines requires medical supervision to be completed successfully with minimal side-effects and risk to the patient. Normally, the withdrawal process is managed by slowly reducing the dose and transferring the patient from a slow acting, to a long acting, form of the drug. Still, full resolution of benzodiazepine withdrawal syndrome can take up to 6 months or even longer.

Family members say even though Jacobs brought his Xanax with him when he checked into jail, administrators and jailers refused to give him his medication – and contend they did nothing wrong.

“Whatever the doctor, the internal doctor said he was prescribed, was what he was given,” Galveston County Sheriff Henry Trochesset said. “Individuals come into the jail all the time. Some of them are taking medications that they shouldn’t be, or they say they’re suppose to be on certain medications.”

Trochesset added, “[The Jacobs family is] trying to throw some red flag into the air that we apparently did something to him — when [Jesse] just died of natural causes in jail.”

The Galveston County coroner’s office declared Jacobs died from a seizure but Dr. D.M. La Grone, who treated the man, insists the seizure was a direct result of being deprived of his medication.

Additionally, an attorney for the Jacobs family’ reported that the pill bottle he brought with him to jail was never opened and medical records from the jail show the deceased never received the drug.

“I’m angry,” Jacobs’ father said Thursday. “Because as far as I’m concerned, they executed my son just as sure as if they put a gun to his head and pull[ed] the trigger.”

Jacobs was pronounced dead in the emergency room on March 13.

Predictably, an internal review of the incident found “no wrongdoing” by the county – but the Jacobs family is now pursuing civil litigation in the wrongful death of their son.

“Our son was concerned that he was not going to receive his medication. He told us, ‘Mom what will happen, if I don’t receive this?'” Jacob’s mother Diane said. “Our son was hooked up to every kind of machine, and [then,] he wasn’t there anymore.”