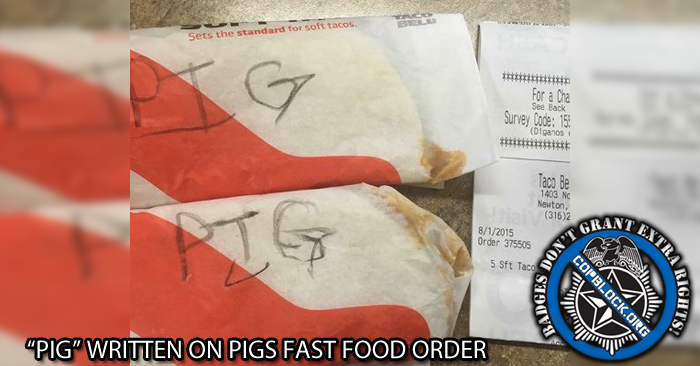 Let me begin by saying  “pigs will eat everything but the teeth.”

If this comparison between swine, and cops doesn’t ring true, you obviously haven’t been paying attention. The police have killed 685 people to date this year alone. This doesn’t cover brutality, extortion, or sexual abuse.

Last night a cop and his fiancé received burritos with the word “Pig” written on them. The department released this statement this morning via Facebook.

There is a photo depicting a derogatory term written on the food wrappers of one of our officers who stopped in to our local Taco Bell to pick up dinner for himself and his fiance last night. That photo was posted to social media by a person who is not connected with the Newton Police Department. The photo has gone viral causing strong emotions to be voiced in opposition to one of our local businesses. We do not support this sentiment.

The store manager is terribly apologetic of the actions of her employee and assures us the situation is being handled appropriately. A meeting this morning with the Senior Director of Operations yielded positive results, and we are actively working to develop a partnership with Taco Bell to host a community event in the near future. Details will be announced when available.

We understand the incident was the action of an individual, and do not hold ill will to Taco Bell or any of its employees (even the individual who wrote the message). We look forward to a long partnership with this local business, and sincerely hope this negative experience can be a catalyst for positive change.

The police are now working with Taco Bell to have a community event in the near future. Hoping to use this “negative” event as a “catalyst for positive change”.   Could this be another one of those staged publicity stunts that we have seen so recently in pathetic attempts to restore the reputation on these criminals? Only time will tell.

Would people have been upset if derogatory terms like “Piefke”,  “Kraut” or “Boches” had been written on some Nazi’s food? After all they were just doing their jobs, and following orders too and they committed some of the greatest atrocities in history. People hate them, but if there are some good cops, then logically there has to be good Nazis.