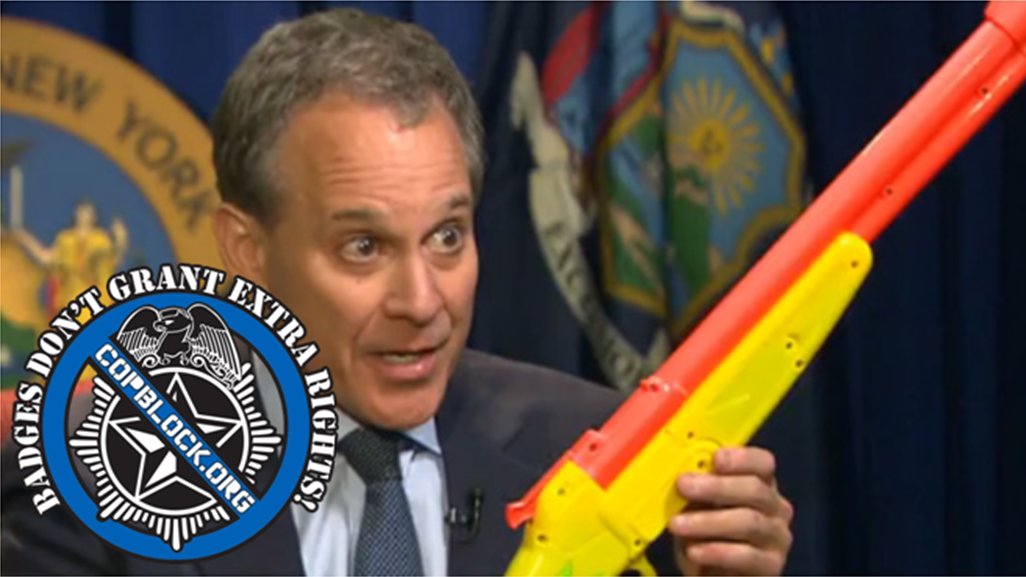 Ironically, the state of New York is holding the very real guns of government against the heads of retailers like Walmart and Amazon – and forcing them to pay over $300,000 – for the “crime” of selling toy ones.

The judgement, which is being referred to as a “settlement” by the mainstream media, results from a December state Attorney General investigation that sent the retailers cease and desist letters for breaking draconian laws against selling children’s toys.

Of course these deaths have nothing to do with the actions of overzealous police officers, who shouldn’t be required to undergo  further training for ascertaining whether or not a playful child may actually be an ardent and dangerous criminal – no, the answer is obviously to just ban toys and extort the people who sell them.

According to a statement from the Attorney Generals office, “[New York] State law prohibits the sale of imitation guns in realistic colors such as black, blue, silver, or aluminum, unless it has a non-removable one-inch-wide orange stripe running down both sides of the barrel and the front end of the barrel.”

Among the targeted retailers are Walmart, Amazon, K-Mart, Sears, and ToyArsenal.com. The businesses must pay “collective civil penalties of more than $300,000,” for selling over 6,400 illegal toy guns in the state from 2012 to 2014, prosecutors say.

The move is nothing new in the socialist hell-scape of New York. In 2003, Attorney General Eliot Spitzer sued Walmart, for violating state toy gun laws which led to a $200,000 fine.

Other retailers including Rite-Aid and four Westchester County dollar stores have also been forced to pay a total of $69,500 for “failure to comply fully with the state’s toy gun law” and other “toy gun law violations” between 2001 and 2002.

Additionally, under the law in New York City, all toy guns that are sold must be neon colored.

Walmart, which removed “illegal” toy guns from its stores after being extorted in 2003, will pay the bulk of the civil penalties after 149 of the toys were sold to residents in the state through its website.

“Once the New York attorney general expressed concern with certain items sold at Walmart.com, we blocked the shipment of those items into the state,” a Walmart spokesman said. “We are pleased we were able to resolve this matter, along with several other retailers.”

It would be nice to see a company like Walmart take a stand, but its executives know the score. If they refused to pay New York’s extortion fees for engaging in voluntary transactions, men with real guns would eventually come and shut down their stores and throw them in a cage.