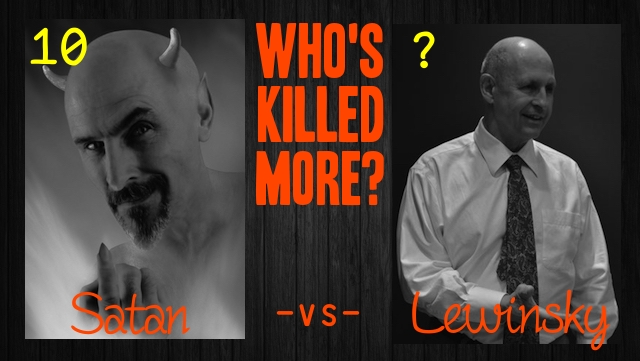 William J. Lewinsky, former psychology professor at Minnesota State University and the founder of the Force Science Institute, is the man who the cops call when one of theirs is set to face trial in police misconduct cases involving excessive force, shootings and civilian deaths by cops. In his role as an expert witness he has been involved in over two hundred cases in the past decade, as service that he charges nearly $1,000 and hour for, he has been able to sway many judges and juries and justify many extremely questionable uses of force. When he is not doing that, he is charging that sum or more to conduct trainings sessions in which he uses exaggerated claims and pseudoscience to scare the bejesus out of cops and inspire them to become deadlier.

And he says he is doing this all in the name of science.

He may be the most misguided, unethical and morally bankrupt individual involved in the American ‘justice’ system. His might be the very face of evil. His encouragement, systematic apologism and profiteering in use of force by police makes him the most complicit man in that entire system.

This past weekend the New York Times ran an entire piece based on Lewinsky, his work and his role in the police state entitled- Training Officers to Shoot First, and He Will Answer Questions Later. The piece, by writer Matt Apuzzo, goes into great detail about the history, philosophy and deeds of the man behind the excuses police give for the use of force on the streets and in courtrooms. I encourage you to read the whole article, while I will only discuss a few parts below.

First I would like to make it clear that what this man is doing bears no resemblance to science, its method, applications or practices. It is at best pseudoscience and at worst total asinine malarkey that feeds on the scientifically illiterate and our widespread culture of misguided scientism. These are not just my opinions, but those of several in the scientific community and elsewhere who find his immoral and unethical findings to be based on the thinnest margin of scientific inquiry possible.

Lisa Fournier, a Washington State University professor and an American Journal of Psychology editor, was asked to review Dr. Lewinski’s studies by the Justice Department and a private attorney in two separate cases in 2011/12. Since the good doctor was publishing his ‘science’ in law enforcement journals and not in scientific journals, his work did not face peer review. When Fournier’s findings were released it was suggested that Lewinsky’s scientific assertions lacked basic elements of legitimate research, such as control groups, and drew conclusions that were not supported by the data.

“In summary, this study is invalid and unreliable. In my opinion, this study questions the ability of Mr. Lewinski to apply relevant and reliable data to answer a question or support an argument.”

Aside from being particularly poor science, the entire ideological underpinnings of his philosophy, and those of his followers, are logically flawed. The idea that science can accomplish anything, even that which is outside of it’s methodological domain, is the worldview called ‘scientism‘. I have written about the problem of scientism and how it relates to the police state in the past. One of the crucial failings of that ideologies adherents is accepting anything portraying itself as scientific is valid science. The hyperbolized belief in the scientific method as the only way to attain meaningful knowledge makes it easy to dupe people into believing in something that may not be scientific in any way, while claiming to be so.

Besides the poor science and blatant scientism that makes Lewinsky’s work a rational heresy, his work contains a number of ethical and immoral components.

How many of the thousands of people that have been killed since his work began over a decade ago were killed because Lewinsky’s misguiding and reprehensible rhetoric and training have conditioned tens of thousands of officers across the country to kill first and ask questions later? My guess would be that his influence has directly caused the deaths of hundreds of civilians, many of whom were not even guilty of any crime, or at least none of any significant social impact or any victim whatsoever.

Meanwhile the impact of this one man has helped create an ever-widening chasm between the police and those they are supposed to serve and protect. His teachings and courtroom circus antics have created or denied great numbers of real victims. The death toll created by the evil William J. Lewinsky’s actions cannot be known for certain, but can be estimated to be at least in the triple digits. Since he is still at it, that number will continue to rise. In the bible, Satan only killed ten people, and that was thousands of years ago. What do you see when you imagine the face of evil, imaginary demons or humans without virtue?