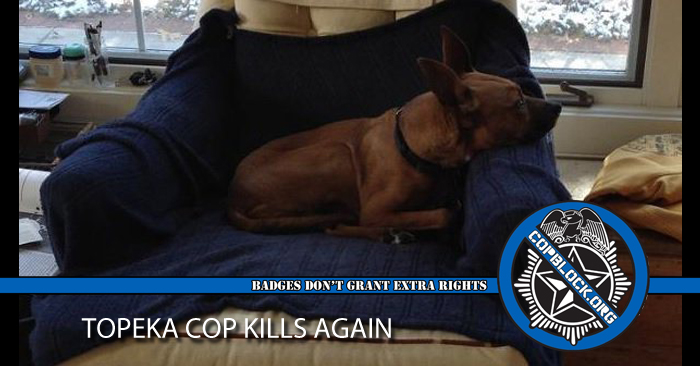 It was April 30th 2002 when, responding in his cruiser to what turned out to be a false alarm, Officer Michael Cruse ran a stop sign at excessive speed, colliding with the pickup truck of 61 year-old Leonard Porter, killing Porter. Cruse faced a bevy of charges but ultimately pleaded guilty to a misdemeanor involuntary manslaughter charge and was sentenced to one year in jail for the death. Thanks to blue privilege he spent 30 days in jail, 60 days on house arrest, and less time on probation than most people who get convicted of trespassing. And though he was initially fired by the Topeka Police Department, successful arbitration returned him to the streets the following year. I mentioned blue privilege right? Good, because it gets better.

Looking back to 2002 reveals a storyline peppered with typical signs of preferential treatment for our boy in blue: The obvious light sentence. Procedure/policy violations. Lax crime scene control. Testimony from fellow officers substituted for expert testimony.

“…the crash site wasn’t treated as a crime scene for five hours after the accident, a violation of police protocol, and police officer Roger Smith, who saw the accident, testified Cruse was driving about 45 mph, negating the need for a reconstruction expert to testify Cruse was going 53 mph, Lemon said.”

“For six years, Cruse and his brother and sister were poorly treated by the stepmother, and sometimes Cruse was the victim of physical abuse”

The Capital Journal Online reports today on the murder of Josie (Macnish) on July 23rd of this year. Josie was shot twice by Officer Cruse while responding to another false alarm, it turns out.  Josie was the dog of a retired judge. The 26-pound raging beast of the miniature pinscher breed with some boxer apparently thrown into the mix, naturally and properly protecting her own territory from an armed invader, presented such a threat that Officer Cruse felt it necessary to pop some caps in that bitch (see what I did there?)!

It looks like the fix may already be in regarding the death of Josie, as police released a redacted incident report removing the officer’s name–but with typical government efficiency forgot to redact his signature, leading to his easy identification. The same Journal article from today tells us that Cruse wrote in his report,

“I attempted to place time and distance between the dog and myself by running backwards. The dog continued to aggressively run toward me to attack…I…shot the dog 2 times effectively ending the imminent attack”

I was just sitting here playing with my own dog when my wife pointed out the story to me on the CJ Facebook page. My dog is no less than twice the size of Josie. My Daisy poses no threat to me at all. On her best day I outweigh her by more than 100 pounds. If she bit me, my body weight alone would be enough to crush her so badly as to ensure it was the only bite she got in. I’m 42 and faster and more agile in attacking with my four limbs than she is in her prime. I’m not a big guy, she’s not a miniature anything, and she would not survive a violent encounter with me, armed or not.

A swift boot to the ribs by a man of moderate strength would have sent this dog flying across the yard, so why did this man kill this animal? Because he could. Because he knew there would be no real repercussions for doing it. Because he was allowed to return to his position after killing a man. Because he has a callous disregard for life in the face of his authority. He was given the benefit of the doubt, even after being found negligent and lacking real remorse for his actions, simply because of his association with the state, rather than facing the reality of his actions. Michael Cruse injured four with his cruiser hardly a year before he killed Leonard Porter.

“This accident wasn’t Cruse’s first, after all. He was involved in another collision involving his police cruiser. The accident injured four people, including him, in March 2001.”

But Miiichul, you just don’t know what the police who protect us go through each day. No, I don’t, but I know what it is to be responsible with power. I know what it is to carry a gun nearly every minute of every day for 21 years and counting. I know what it is to face multiple instances of real threat to my life while armed, yet maintain a cool enough head about me to not shoot up my aggressor and still be here to tell you about it. I know that the reason I drive through a stop sign is not just because it’s my turn to go, but because it is safe to go. Why can’t those who are supposedly supposed to protect and serve us be expected to meet the basic requirement of being responsible for their own actions? Why do people continue to be given police power over the rest of us when they’ve proven they are not responsible? When do I get to quit asking those questions?

Apparently there is body-cam video of what happened to Josie. If and when it is made available I’ll be sure to revisit the story for an update. I’ll catch hell for this one but #CanineLivesMatter