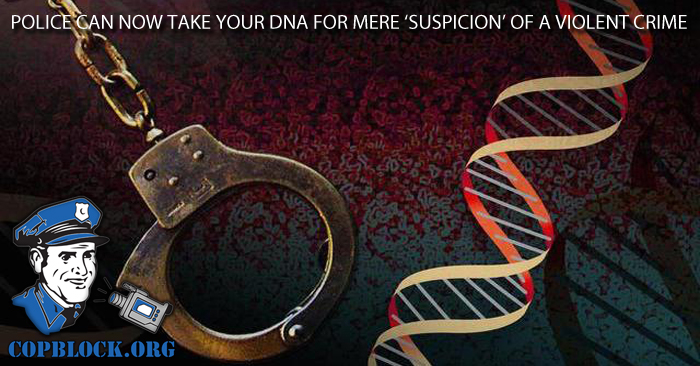 On Monday August 3rd, 2015, the Dakota County (Minnesota) Sheriff’s Office became the first in the nation to implement a new Supreme Court ruling that allows police to collect DNA from those arrested for suspicion of a violent crime. The old laws stated that a conviction must occur before the state could steal your biological recipe.

According to KSTP ABC5:

Swabs would be taken from those accused of the most violent crimes like murder, rape, robbery and physical assault. On average, about 10,000 suspects pass through the jail and the policy would affect a fraction of them—about 350.

Tim Leslie, Dakota County Sheriff, has said that the procedure can be likened to fingerprinting, mugshots and other evidence gathered by those processed. Neither he nor the Supreme Court see how invasive such a gathering of information can be, which is unsurprising.

The law states that if a defendant is cleared of the crime they were arrested on suspicion of that the DNA records will be wiped clean from their system. While this should lend a modicum of comfort it belies a certain ignorance of three things.

Although DNA evidence is often a powerful crime-fighting tool, its collection presents a number of ethical dilemmas. There remain many known and even more unknown dangers of an individuals genetic information being posted on the internet. The availability of the information would make it possible for it to be used to frame innocent people. There is also the question of what will be able to be done with DNA in the future, and by whom. Having this data may become an existential risk in a number of uncertain, but regularly explored, scenarios.

The particulars, however, are hardly the biggest issue here. The biggest issue is that the police state continues to encroach not only on our very rights and freedoms, but even into the microscopic world of our biological make up. As the borders between freedom and security continue to break down under such legalities, we become more buried in the sort of authoritarian totalitarianism that is antithetical to the liberties, freedoms and rights we are told we are endowed with at birth.

So either those were all lies to begin with, or government and its law enforcement agencies have usurped powers never intended to them in a free nation. You cannot have it both ways. Either our entire way of life was a falsehood or the state has gone too far. Which is it?