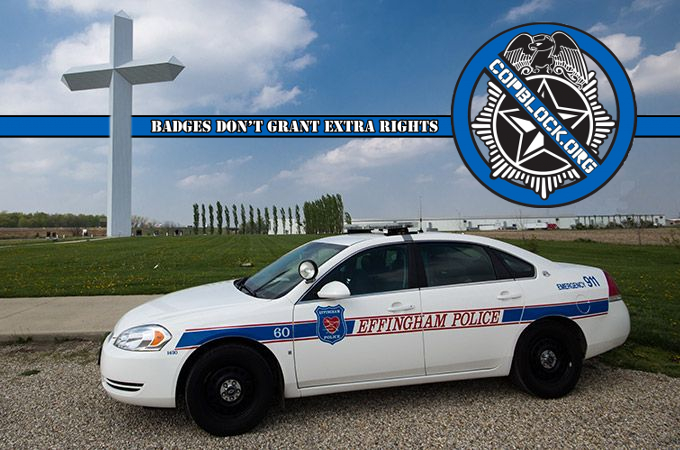 The post below was shared with the CopBlock Network anonymously, via the CopBlock.org Submissions Page.  The person that submitted the story wanted to share his story about dealing with some Road Pirates from illinois in order to point out how important it is to both know your rights and to assert them any time you deal with police.

If you don’t use them you’ll lose them.

So I was pulled over around midnight heading home from work.  On my way, I noticed a local cop car following about 20 feet behind me, with no lights.  After about four miles, he flashed his lights and I pulled over at a gas station. “No big deal” I thought. Then another car pulled in with his lights on and parked horizontal to the front of my truck, blocking me in.  Two more pulled up by the rear sides of my truck and I was completely blocked in.  A fifth cop car parked in an actual parking spot.

I was pulled over for “no license plate lighting” and was issued a warning.  The officer who issued the warning went to his car to put in the ticket or something.  When he left another cop walked up to the window and asked me stupid questions like, “What type of illegal drugs do you do?”  And “Do you have them with you?”  I kept asking to leave, but that guy was taking forever.

While the second cop was asking me questions, the others were looking over my truck with flashlights.  One officer walked up to the passenger window and asked if he could look in my tool box; of course I said, “No”.  He smiled, looked to his left, nodded, and then the tool box in my bed opened!

“Hey, man!” I yelled, reached for my door handle, and pulled it out as the officer in the driver’s side window locked my door just before I could open it.  Someone said, “There’s an uncased firearm.”  I replied, “What!?! That’s not true!”

The officer unlocked my door, opened it, and held out his hand like a butler would holding open a door.  He pulled out an air soft handgun with an orange tip.  When I got out, I noticed they had taken everything out of my toolbox and put it in my bed.

I’m leaned against the parked car away from my truck and they ask me to turn out my pockets.  I said, “No.”  Then I said I’m not doing anything else until I call my lawyers and parents.  I couldn’t believe I hadn’t thought of that sooner!  They were probably worried sick!

I pulled out my phone and he held out his hand.  I laughed, so did he.  The rest of the officers gathered around, including the one with my ticket.  I asked the officer who had originally pulled me over if I could leave.  “Not until you hand over the phone, boy” one cop said.

I used to read my fathers law books and I’m working on getting a law degree myself, So I manned up and laid out the facts.

“Alright gentleman.  Let me start off with letting you know my parents represent the Charleston (IL) police department, we’ll be expecting an apology, or your jobs, or both.” The asshole in my father was coming out of me!

They kind of looked at each other and one said, “Okay, but it’s officer safety.  You’ll be arrested for refusing to cooperate.”  I smile and say, “Section 1983, title 42 of the U.S. Code states that I CANNOT be punished for refusing to give up my rights.”  My father pulled that card when the school tried to take my phone. “So go ahead and arrest me, let’s tee it off in “police brutality” case.  After all you didn’t harm me, but tried to strip me of my rights, right?”

I hold out my wrists and stare at the cop that asked the questions in the face.  I looked around and he looked back at me and said, “Have a nice, fucking, night,” and walked off.  The rest followed except for the original cop, who pulled me over.  He asked, “So are you gonna refuse to sign this?”  I said, “No, hasn’t stopped you yet,” and signed it; which after all, really is a traffic violation.

When I told my dad, I don’t think I’ve ever seen him more proud!  He made calls and we were invited to Olive Garden to eat with the police chief.  He paid for the whole thing out of his own pocket.

The Effingham Police mission statement on their website states:

We, of the Effingham Police Department, dedicate ourselves to serve the citizens within our jurisdiction and endeavor to treat all people in a fair and impartial manner.

We commit ourselves to providing professional, high quality and effective police service in partnership with the community.

We hold ourselves to the highest standards of conduct and ethics as we regard it an honor to hold the public trust.

We regard our employees as THE most important asset to our organization. We encourage the intellectual and physical development of our people through training and education.

It seems that the Effingham Police Department left out a section about honoring their oaths to the Constitution of the United States.  After all, it’s just a piece of paper.

You have to invoke your rights, folks.  Officers are counting on you NOT knowing your rights. They can and will use that ignorance to ensnare you into any kind of frivolous charge that they can get you on.  Invoking your rights is not the same thing as being uncooperative.

Do not fall victim to their tactics of intimidation.  There are many resources out there to educate yourself on your rights.  CopBlock.org also has a resources section that can provide you with a wide range of information and direct you to other resources about your rights and protecting yourselves against the police state.

BTW, one of those rights that you should always be exercising is the right to film the police. they aren’t always so quick to back down just because you know your rights. Don’t leave it up to their word against yours.