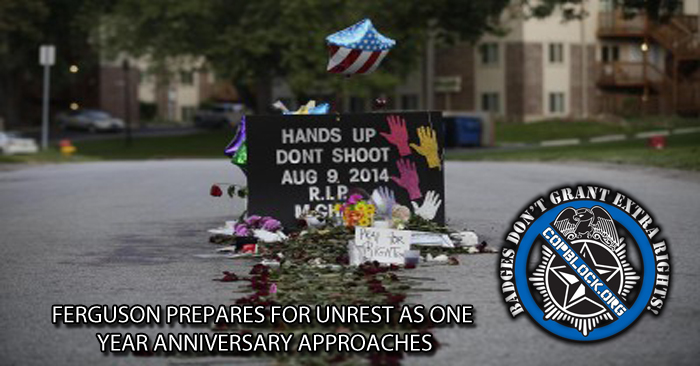 As the city of Ferguson approaches the one year anniversary of the execution of 18 year old Michael Brown, one can’t help but wonder if they should expect the same rioting and mayhem brought on by the corrupt police department and their armed cronies. It’s bad enough that they had to witness a surrendering 18 year old shot execution style with his hands up, the way they left him there for four hours, uncovered on display to his neighbors like he was a prized kill, and the aftermath when the police came to riot (signs are for protesting, shields & flash grenades are for rioting).

A number of changes have been made to the department and the city of Ferguson in general.

Police Chief Andre Anderson started work July 22 & City Manager Ed Beasley was hired June 9. Both are black, better reflecting the population of Ferguson, A St. Louis suburb of 21,000 residents, which is more than two-thirds African American. Two black City Council members were elected in April, joining one previously serving on the six-member council. This all sounds good, but what about the 89 additional municipalities in St Louis County?

There is a microscope on Ferguson, But I believe its going to take a lot more than changing the skin color of a few city workers and the police chief to have any real impact on the many years of deep rooted corruption and racism that plagues the St. Louis law enforcement municipals. The City of Jennings MO Police Department for instance, was disbanded three years prior to Michael Browns death due to high racial tension between the department and its citizens. Darren Wilson was among those fired, as a result.