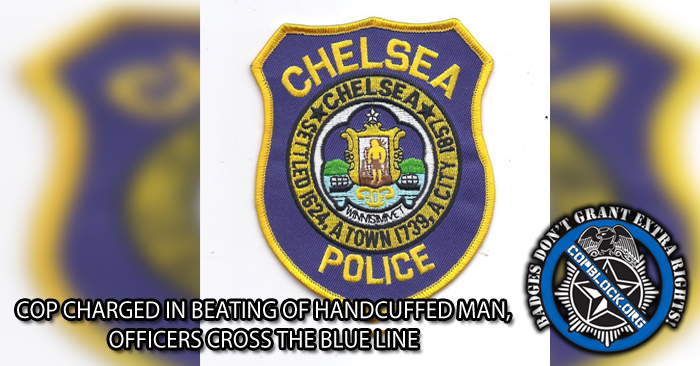 Felix Rivera, 34 year old Chelsea police officer was charged with assault and battery, civil rights violations and filing a false police report to cover it all up.

“There is no room in law enforcement for anyone who would beat a handcuffed prisoner or lie in a report, The evidence suggests this officer engaged in criminal conduct, not police work.”

Originally the police were dispatched to a Chelsea home after receiving reports of a man with a gun. What thy found was drunk 20 year old. The supervisor accused him of interfering, and ordered him into protective custody.

On the way to the vehicle is when Rivera hit the restrained man four times in the face knocking him to the ground. Rivera said in his police report the man pushed an officer. Questionable at best as he was in handcuffs and on the way to the cruiser, escorted by at least two officers. The man was charged with assault and battery on a police officer, disorderly conduct, and resisting arrest.

Luckily for the victim someone had recorded objective video evidence, and even better than that other officers at the scene crossed the “Thin Blue Line” and gave statements contrary to Rivera’s actions and corroborated the victims story. Prosecutors dropped the charges, and instead began investigating Rivera leading to criminal charges.

Chelsea Police Chief Brian Kyes, called the charges against Rivera “extremely troubling and concerning. Please rest assured that officer misconduct in any form including excessive use of force by our personnel will not be tolerated under any set of circumstances,”

Rivera has been suspended without pay, and will be arraigned on Tuesday.