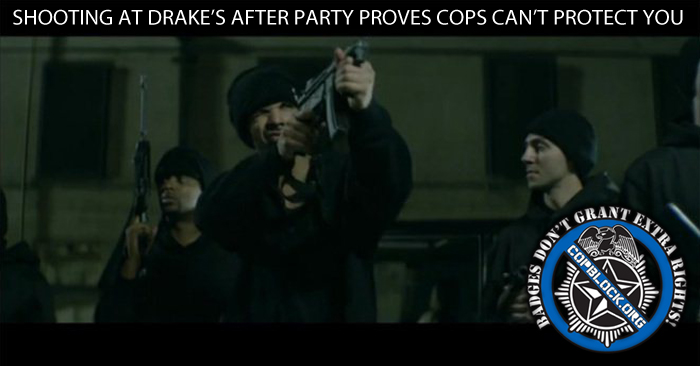 Early this morning gunfire erupted at Drake’s after party for OVO Fest, hosted by the artist Drake, himself.

Two people were killed and three others were inured. Regardless of a large visible police presence people were able to get guns into the nightclub, and use them to cause the death of 2 people and injure more.

The violence spilled out of the club and into the streets, creating three crime scenes for the police to investigate. Last year the same afterparty for the same music festival was also shot up, no one was killed but at least 2 were injured. Drake hosted that event as well, but its unclear if he was present at either party for the shootings.

This year has been the most violent year in Toronto with 143 shootings. The police took this into account when they planned for the event, and deployed a heavier than usual force. In spite of their attempts to keep everyone at the party safe, they failed that objective completely.

The police don’t even know how the guns got into the club. Deputy Police Chief Peter Sloly told a press conference:

“The police don’t know how the weapon or weapons got into the club. “General procedure” would see private security agents pat down partygoers”

They also don’t know who the suspects are.

John Tory the Mayor of Toronto is confident that the police will track down the offenders.

If the police were anticipating problems, and came out with enough resources to stop it. Why were they unable to keep these people safe? The evidence shows that regardless the amount of preparation or manpower used the police are incapable of actually keeping you safe. Think about that and then ask yourself, “If the police can’t keep me safe then why do I pay for them too?”