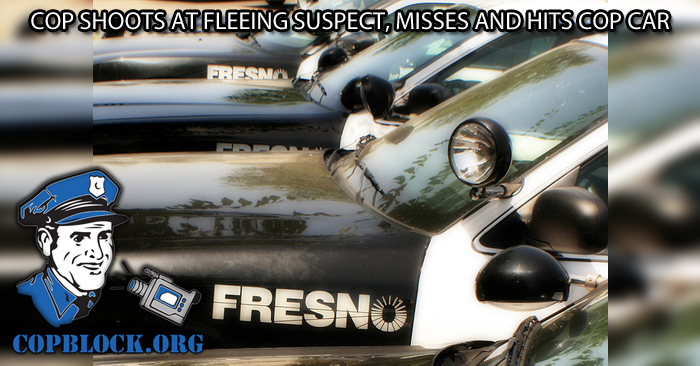 A Fresno police officer shot at a fleeing suspect on Thursday, but missed and hit her own undercover cop car — and thankfully missed drivers traveling on a busy Fresno street. The Chief of the Fresno police department, Jerry Dyer, said that just before 3 p.m. plain clothes officers with riot vests in unmarked cars pulled into the Taco Bell – no, they were not seeking revenge on employees who wrote “PIG” on a cops order – on Olive Avenue near Highway 99. Two officers approached three men standing in the Taco Bell parking lot.

Two of the men walked away, but the third man — African-American in his early 20’s — stayed where he was. According to Dyer, the officers believed that the man was a gang member based on the clothes he was wearing.

One officer proceeded to pat the man down, and says he felt something “metallic and hard”. The man fled and the officer shouted “he has a gun!”

One shot hit the officers’ unmarked patrol car. Dyer said investigators are still trying to determine where the other two rounds went.

A California Highway Patrol officer eventually caught the man and he was arrested.  Police claim he tossed a machete while he was running.

A nearby off-ramp from Highway 99 was shut down for hours and freeway traffic was backed up for miles.

The officer that shot at the man is on paid vacation.
1k
SHARES
FacebookTwitterGoogleRedditTumblr
DiggLinkedinStumbleuponMailPrint