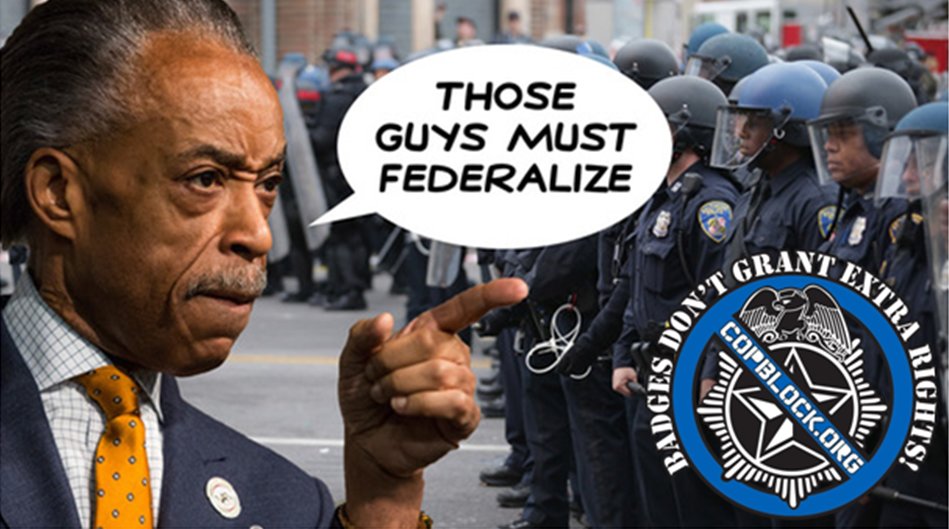 In wake of the death of Freddie Gray and the culminating Baltimore riots earlier this year, Al Sharpton became the first to openly call for the United States government to federalize police forces in the city.

Sharpton demanded that the Justice Department “take over policing in this country,” and asserted “we’re going to have to fight states’ rights in terms of closing down police cases.”

Meanwhile, Police Commissioner Anthony W. Batts – who stood in opposition of the federal oversight – was fired for becoming a “distraction” after a recent spike in homicides.

On Monday, city leaders announced that “ten federal agents from the Federal Bureau of Investigation; Bureau of Alcohol, Tobacco, Firearms and Explosives; U.S. Drug Enforcement Administration; the U.S. Secret Service and the U.S. Marshals Service will embed with the police department’s homicide unit for the next 60 days.”

The agents join 20 other ATF agents who were already sent to the city last week to form Baltimore Fed – or “BFED” – a joint task force that “is the next step of an all-hands-on-deck movement addressing violence in our community,” Rawlings-Blake said.

With promises that the surrender of Baltimore’s sovereignty to the federal government will spurn “innovative ways to bring charges against people harming the community,” interim Police Commissioner Kevin Davis asserts that “federal assets and federal techniques will help [the city] close more homicide cases.”

The agenda to consolidate federal authority over local law enforcement dates back decades, but lets get you up to speed on what has occurred in just the last several years.

In 2011 the consolidation of police departments to regional agencies became commonplace as budget cuts and funding was blamed for the cause of this merging of local forces into one encompassing police enforcement apparatus.

Under the creation of the Unified Police Department (UPD) in Salt Lake City, Utah, for example, jurisdictions and municipalities previously controlled by the Salt Lake County Sheriff’s Office was reallocated to UPD.

The UPD dissolved the Sheriff’s Office and endowed monopoly enforcement privilege over the area onto a private security firm. In 2012, a white paper presented to the House Permanent Select Committee on Intelligence outlined an ‘evolving mission’ for Homeland Security that moves away from fighting terrorism and towards growing a vast domestic intelligence network that would expand integration with local and state agencies and private-public partnerships already underway via regional fusion centers.

DHS maintains that “the threat grows more localized” which requires the militarization of local police in major cities and the training of staff from local agencies to make sure that oversight is restricted to the federal government.

The creation and implementation of fusion centers in urban areas was to “serve as focal points within the state and local environment for the receipt, analysis, gathering, and sharing of threat-related information between the federal government and state, local, tribal, territorial (SLTT) and private sector partners.”

“As the threat grows more localized,” the report reads, “the federal government’s need to train, and even staff, local agencies, such as major city police departments, will grow.”

As of 2014, 8,000 local law enforcement agencies participate in the Pentagon’s controversial 1033 program.

The program has transferred over $5.1 billion in military hardware including armored personnel carriers built specifically to resist roadside bombs, amphibious tanks, and drones from the Department of Defense to local American law enforcement agencies since 1997.

According to the US Government’s Defense Logistics Agency Disposition Services “Law Enforcement Support Office,” material worth $449 million was transferred in 2013 alone.

A study released this year, by the American Civil Liberties Union, confirmed that with the help of equipment and strategies imported directly from the United States military, police have become dangerously and unnecessarily federally militarized. The report, entitled War Comes Home, looked at 818 Swat incidents from July 2010 to October 2013, that were carried out by more than 20 law enforcement agencies in 11 states. Seven cases were found where civilians died in connection with the deployment of the Swat teams, two of which appeared to be suicides. An additional 46 civilians were injured as a result of officer force.

The study found that not only are people dying and being injured by police teams deploying war-time tactics; there are also many accompanying lesser transgressions. For example, the growing use of battering rams to smash down doors, which routinely causes property damage to homes.

Swat teams, a 1960s invention, were initially utilized by officers to help react to perilous situations like riots and hostage takings. In recent years however, they have developed into something entirely different.

The study found that the majority, 62 percent, of Swat team deployments were for drug searches. Likewise, 79 percent involved raids on private residences. In fact, only about 7% were used for incidences the technique was originally developed for.

“Law enforcement agencies are increasingly using paramilitary squads to search people’s homes for drugs,” the study reads, adding that, “Neighborhoods are not war zones and our police officers should not be treating us like wartime enemies.”

Though a rapid transition to a federalized police force is unlikely in the United States, an incremental shift to greater federal control is already underway.

A rational person might conclude that the answer to fixing bad government policing could never be greater government control of policing, but already, law makers and officials are rushing to the defense of the federal takeover in Baltimore.

“We will do all in our power to make sure the resources are here to make this endeavor a success,” Maryland Democratic Sen. Barbara Mikulski said.