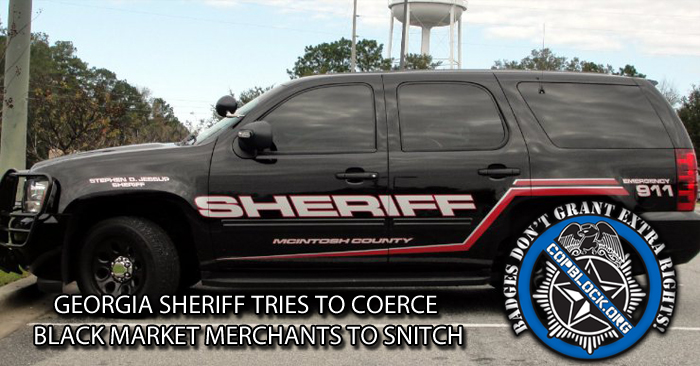 McKintosh Co. Sheriff Stephen Jessup believes he has a clever way of ending the black market drug trade in his claimed gang territory.

He recently posted an ad in the Darien News enticing unlicensed (aka: illegal) drug dealers to rat out their competition. The arrogance and hubris with which this middle management gangbanger has displayed is sickening.

First off, the man claims that he offers a “FREE SERVICE”, anyone who has ever paid property taxes will tell you that the police are absolutely not free. “We offer a FREE service to help you eliminate your drug competition” is simply a false statement.

Secondly, he claims the right to violently control a marketplace where individuals voluntarily exchange goods for value. While simultaneously insulting the individuals who work in that market place.“They are cutthroats and they will turn on each other all the time,” Jessup said Friday

“I campaigned on trying to fight drugs to the best of our ability and to really make a dent in the local trade and this is a way of trying to do that,” McIntosh County, population 12,000, commits around 600 drug-related kidnappings per year. At a rate of 50 people per 1,000 citizens, The McIntosh County Gang certainly would seem to have enough to do to continue generating revenue, and support their positions as road pirates.

I would speculate that his plan will be a huge failure. Most operators that work with in black markets have a much stronger distain for governmental authority then they do love for money. Additionally, individuals in the drug culture are well aware that snitches get stitches. The sheriff is essentially asking for these market-based actors to go against their own rational self interest. Any good businessman will tell you that that is not an option.