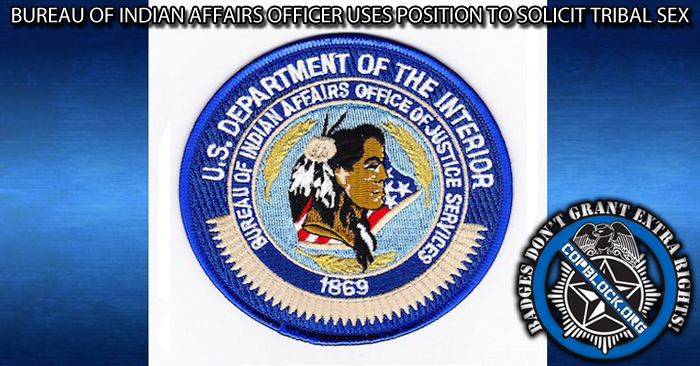 The following post was submitted to CopBlock.org by Andrew Kenneth Willey
at our Submissions Page

After an altercation between my wife and an employee of the Cheyenne and Arapaho Tribes at Concho, OK in November of 2010, the tribal security called the BIA law enforcement and Officer Palomo took the report from the employee and afterwards came to my residence to interview my wife. We were having relationship problems and after an argument, the El Reno Police arrived and told me I had to leave.

After I left, BIA Officer Palomo arrived and interviewed my wife. He took her for a ride in his patrol car to the BIA Concho Agency to “write a statement”. Afterwards, he took her back to my apartment (I was gone because the El Reno PD made me leave) and gave her his personal cell phone number, which he used to make contact with my wife. This BIA officer then continued to talk to my wife until he succeeded in arranging for sex with my wife. He then picked her up in his personal vehicle and took her to a hotel in Oklahoma City where they had a sexual affair.

After my wife and I reconciled, she told me about the incident which I reported to the Bureau of Indian Affairs Law Enforcement and requested that Officer Palomo be investigated for his interference in our marriage. A BIA investigator by the name of Chavez, I believe, came from New Mexico to my place of employment in Concho, OK to interview me and I gave him the account according to what my wife told me. He then called my wife via telephone, because she refused to give an “in person” interview. The investigating BIA officer informed me that he spoke with my wife but couldn’t tell me what she said. Upon asking her what she told the investigator, my wife said she told him that “it was true”. I didn’t hear back afterwards about the resolution of the complaint until January 2015, due to the sensitivity of the subject.

I’ve purposefully avoided the BIA cops which patrol the area where I work and live because of the emotional, mental, and marital anguish this has caused in my home and marriage. After asking BIA officer Cody about the complaint, he told me that it was handled by the “higher ups” and that Officer Palomo admitted to “off duty misconduct” and was suspended for three days. That’s all that happened and he was allowed to patrol the very same area, and continued to have sexual affairs with a number of Cheyenne and Arapaho young women in the area for the next 3+ years until he transferred to the Wind River Agency in Fort Washaki, Wyoming in August 2014. I’ve been told that he had numerous affairs with girls in the surrounding Cheyenne and Arapaho tribal communities before he transferred to Wind River Agency.

This officer of the Bureau of Indian Affairs is abusing his authority as a BIA law enforcement officer to take advantage of pretty, young Native American girls, committing sexual offenses which he should be held accountable for as a sex offender and prosecuted. This is oppression of a sexual nature on the Native American women in the area of operation of this dirty cop, who is not a tribal member, but a Mexican working on Indian reservations and preying on vulnerable young Indian girls. This kind of “misconduct destroys the family unit, causing homes to be broken up, and many more domestic issues which are a result of this officers misconduct.

I encourage anyone who has been affected by this dirty cop’s sexual predatory to come forward and give their account. We need to petition that this dirty cop be removed from service. To have a cop violate you by having a sexual affair with your wife with whom there are children involved is a violation of the law, especially when it is the very officials who are being paid to uphold the law. It causes the citizen to not only distrust the BIA police, but also causes bitter resentment toward the offending officers and spouses whom they prey upon. These sexual predators need to be held accountable and their authority taken from such offenders so that no more families are subject to this kind of violation and perversion of the law in Indian territory or anywhere else for that matter.