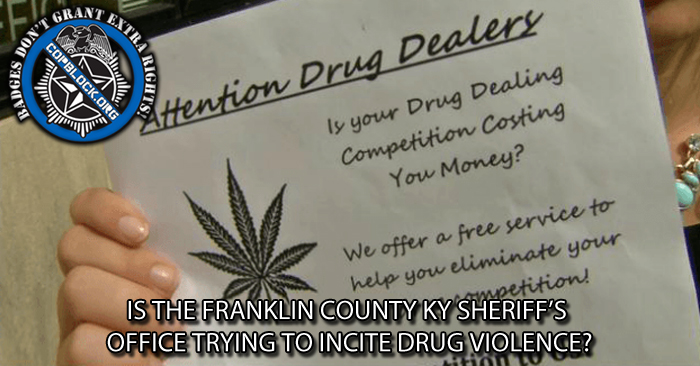 The idea for catching drug dealers via other drug dealers first originated
in Georgia, as we recently covered in this story.

The Franklin County Sheriff’s Office in Kentucky recently posted a tongue in cheek flier encouraging drug dealers to get rid of their competition by snitching on them. While the idea has a humorous element to it, that department is sincere in hoping the flier will actually inspire dealers to narc on one another.

“Is your drug dealing competition costing you money?”

“We offer a free service to help you eliminate your drug competition!”

Sheriff Pat Melton has said there has been a lot of response to the flier, both by those who think its a great idea and those who are opposed. He also note that several drug dealers have responded negatively to it, but one wonders how he knows these social media users are drug dealers and not just citizens calling shenanigans on an idiotic scheme.

He has also said that the campaign has already led to eight tips on drug-related activities.

So what happens when these drug dealers begin seeking revenge or attempting to preemptively silence their would-be-narc competitors? Most drug dealers are just regular people who are either trying to make a few bucks, support their own habits, or both. Yet because of the black market conditions created by the War on Drugs and our nations backwoods prohibition policies, there are unscrupulous and potentially violent individuals whom might be incited to violence by such a scheme.

What happens when violent crimes begin happening merely as a side effect of a harebrained idea by law enforcement officials to raise revenue by creating friction in the black market at any cost?

Even if violence is not an issue that arises, might there not be consequences for assisting the most unscrupulous and unethical drug dealers in their rise to dominance? If the bad guy who might sell your fourteen year old some tainted heroin wipes out the good guys who sell marijuana to responsible consenting adults, will the Sheriff’s Office take responsibility for creating a worse situation because they jumped on a stupid idea without thinking through?

This cutesy law enforcement bullshit may be a great way to raise publicity and make some cash, but it is only another misguided and moronic attempt to solve a problem that was created by laws by enforcing them in even more idiotic ways.

There was an old lady who swallowed a fly…