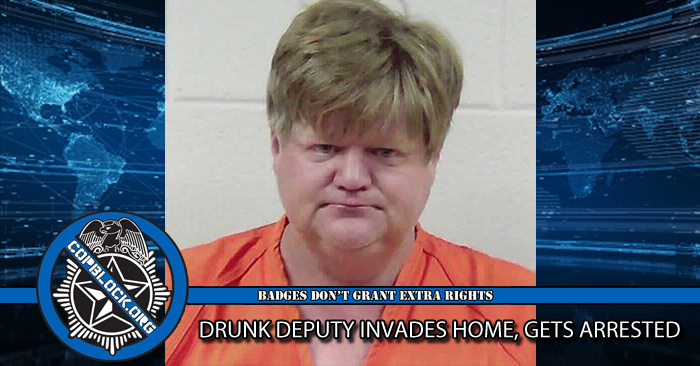 A Polk County sheriff’s deputy spent the night in jail after getting drunk and entering a home that he mistakenly thought was his.  On the evening of August 2, an intoxicated Deputy Noel Smith of Cedartown, GA entered a neighbor’s home on North Cave Spring Street.  The homeowner confronted Smith and ordered him from his house.

A small verbal and physical exchange ensued before Smith locked himself in a rear bedroom and prepared for bed.  The homeowner left the house and dialed 911 to report the home invasion.  Police arrived and took Deputy Smith into custody.  He is reported to have been intoxicated and believed he was in his home.

According to Cedartown Police Chief Jamie Newsome:  “Noel Smith, 46, of a Cedartown address, was released on recognizance bond of $3,000 Sunday. He is facing charges of public intoxication, simple battery and criminal trespass following the incident early Sunday morning.  Chief Newsome states that no injuries were reported after the incident.”

Polk County Sheriff Johnny Moats said Sunday that he has not yet taken action against Smith, but would be following up after the arrest.  “He’s not above the law; none of my officers are,” Moats said. “When any law enforcement officer commits a crime, they have to be treated like civilians.”

Smith, a long-time employee at the county courthouse, faces charges of public intoxication, simple battery, and criminal trespass following his Sunday arrest.  He is currently free on a $3,000 recognizance bond.

Too many officers commit these types of crimes against citizens, only to get a slap on the wrist.  Let’s hope that the sheriff does the right thing and terminates this deputy.  The sheriff’s remark–that when a law enforcement officer commits a crime he should be treated like a civilian–is an understatement.  Officers are to be held to a higher standard due to the power and authority granted them by the state.  This deputy should be treated as a criminal.

Thankfully, no one was injured during this incident.  I will be following the story to see what, if any, action is really taken against this deputy.