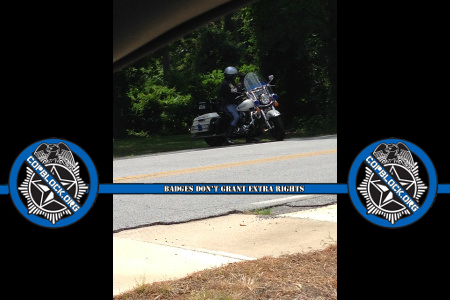 Attached please find evidence that while in the process of revenue collection at the corner of Mobley Road and Cloverdale, the above-named officer was witnessed trespassing on private property. Not only was the officer posted 10 meters up the driveway from the street, hiding behind a line of trees and bushes, as photos will attest, but the officer was filmed driving around the property’s half-moon driveway, instead of driving on city streets, to illegally take position again on private property.

When I questioned the officer as to why he was trespassing on private property, he responded by telling me that it was a vacant house. This is true; however, I informed the officer that the vacant house was for sale, which means that it is owned by someone and not owned by the city. I asked if he had verbal or written authorization from the property owner that allowed him to trespass on the property, at which time he walked away from me telling me to have a good day.

Running speed traps under the guise of proactively protecting the citizenry is simply another way of saying that the city or county is revenue collecting, as this is victimless policing. It is my contention that Motorcycle Officer Corporal Baldwin violated his oath to follow the laws of the city, county, and the US Constitution by trespassing on private property under the guise of authority. Corporal Baldwin violated the rights of the property owner by positioning himself on the property without permission. If I, as a citizen, did the same thing I would receive a citation. Simply because Corporal Baldwin drives a Columbus Municipal Police motorcycle and has a badge does not provide this individual with extra rights beyond those of any other citizen. At the very least, this officer should be cited for trespassing under guise of authority and an internal investigation should be launched into this officer’s conduct. Secondly, since all citations written by this officer that show a Mobley Road or Cloverdale Road marking between the dates of 21 June 2015 and 11 July 2015 were written while the officer was in fact committing the crime of trespassing, all of the citations should be voided, all fees collected at the Recorder’s Court should be refunded, all points applied to individuals’ licenses should be revoked with letters to the victims’ insurance companies explaining the city’s error, all bonds should be returned if the cited victim has chosen a trial by jury in state court, and all state court proceedings regarding these victims should be closed by the state.

You be the judges and tell me if this officer is violating the rights of this property owner.