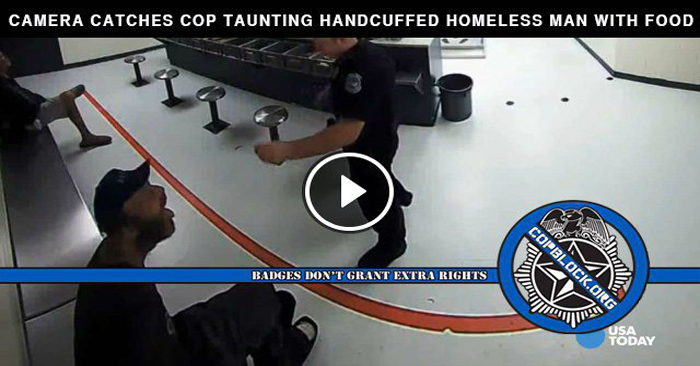 A Sarasota, FL police officer has now resigned after being caught on video throwing bits of food at a handcuffed inmate.

The video appears to show officer Andrew Halpin taunting the homeless man with bits of food that he was throwing in his direction and onto the floor around him.

In the video, the intoxicated homeless man, who was brought in on a trespassing charge, can clearly be seen struggling to reach the food that officer Haplin kicked toward him.

Chief Bernadette DiPino of the Sarasota Police Department said that she was ‘deeply disappointed’ by what she saw and immediately put Halpin on leave and demanded an internal investigation.

“I expect our officers to uphold the highest levels of ethical behavior and treat all citizens with dignity and respect while serving our community,” DiPino said.

Instead explaining the incident to internal affairs, Halpin announced his resignation just moments before a scheduled interview with investigators.

Officer Halpin was a 9 year veteran of the Sarasota Police Department.