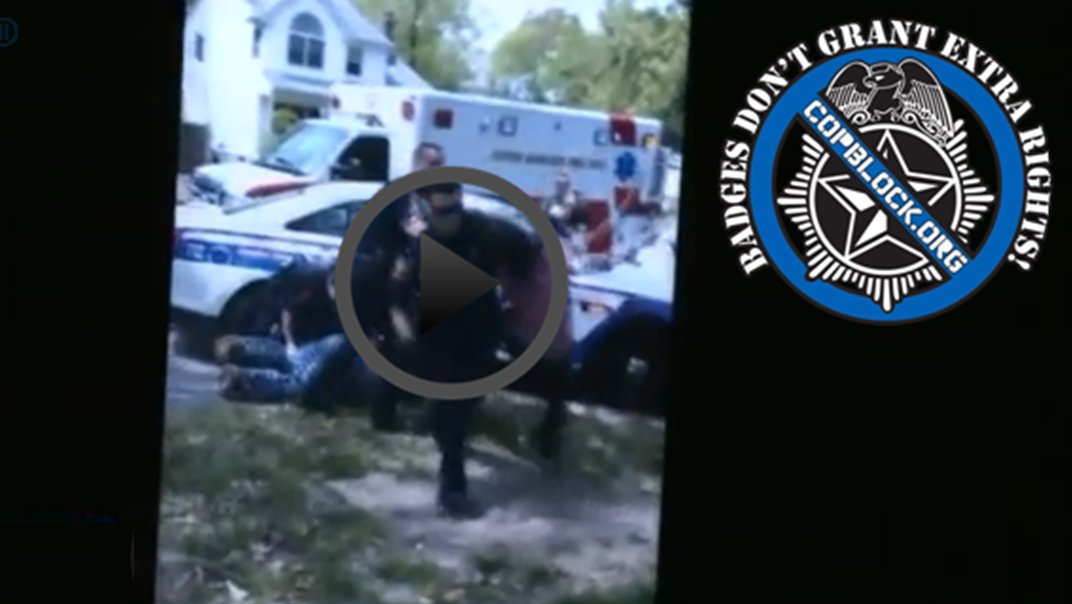 A New York man says Suffolk County police in Long Island tackled him to the ground and attempted to delete footage of police brutality he had recorded but mistakenly removed the wrong file.

20-year-old Thomas Demint claims police have continued to harass and threaten him after the incident, prompting him to go public with the footage for fear of his own safety.

Demint was on his way to work on May 21, 2014 when he spied his friends family being arrested by Suffolk County police in Center Moriches after officers responded to a 911 call reporting that an adult male was attempting suicide.

When police arrived, officials say, officers attempted to administer aid to the suicidal man and his family intervened.

In one of the most egregious parts of video, an officer is seen slinging a woman to the ground rendering her unconscious.

“My mom’s knocked out,” one of the woman’s sons can be heard screaming.

An officer also tased her, and in another part of the video, an officer can be seen punching her other son in the face.

Demints attorney, Ken Mollins, says that as Demint was trying to leave the scene with the footage, three officers tackled him to the ground and charged him with obstruction.

“My client was not aggressive, my client was standing there videotaping,” Mollins said. “This is clearly evidence of police brutality.”

Suffolk County police said in a statement that Demint “interfered with officers by shouting obscenities toward police officers and paramedics as well as entering the scene several times after he was told not to.”

“Mr. Demint’s actions diverted officers’ attention away from the suicidal man and Mr. Demint had to be physically escorted away from the scene,” the statement adds. “Mr. Demint was placed under arrest for Obstructing Governmental Administration and Resisting Arrest.”

Since he recorded the footage Demint says he has been pulled over multiple times by officers that have made threatening statements like, “you’ll see me again, you can count on that.”

Demint also says his phone was confiscated and kept it for weeks.

“I was genuinely shocked,” Demint said. “I don’t regret taking the video but it did bring me alot of complications.”

Police say Demint has made no formal complaint with the department and claim officials were unaware of the video. They say a “thorough investigation” into the matter will be launched.