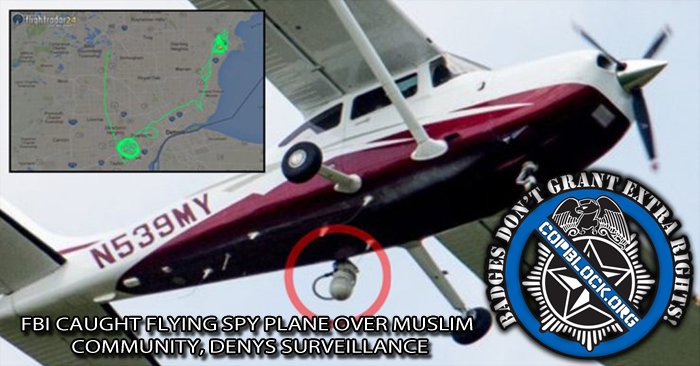 Despite public records showing a spy-plane linked to a FBI surveillance program made several flights over the Detroit area city of Dearborn – which included one that took 90 minutes to make 19 loops – officials claim they weren’t targeting the community for “mass-surveillance.”

The area is heavily populated by Muslims and Middle Eastern residents, who became alarmed after data reviewed by The Detroit News showed that the 2010 single-engine Cessna Skylane increased flights over the community last week.

The plane belongs to a small air force operated by the FBI that uses high-tech cameras and cellphone surveillance technology.

In June, an AP investigation found that during a 30-day period, the FBI had flown more than 100 flights in 11 states.

The flight data, compiled by The Detroit News shows:

Last weekend’s flights in Dearborn fit a pattern used by the FBI in other cities, including in May in Baltimore following riots after the death of a black man, Freddie Gray, who was injured while in police custody.

The Cessna flew over the Dearborn area in slow-speed, counterclockwise orbits several miles wide and about one mile above the ground.

The Cessna’s orbits late Saturday and late Sunday were nearly identical, bordered by Michigan Avenue to the north, Telegraph Road to the west, Ecorse Road to the south and Greenfield Road to the east.

Each night, the Cessna made 19 nearly identical loops over the Dearborn area and neighboring communities, including parts of Dearborn Heights, Allen Park, Taylor and Melvindale.

The center of the surveillance area is near the Dearborn Public Schools building on Audette, east of West Outer Drive.

At 5:51 p.m. Saturday, the four-seat Cessna, white with a splash of red on the nose and tail, first appeared on radar flying over a neighborhood of $300,000 homes in Harrison Township, north of Metro Parkway in Macomb County.

The plane zigzagged over the community and neighboring Clinton Township before flying south and cutting west across Hamtramck and Detroit.

While the FBI has admitted in the past that their aviation program is used to follow terrorists, spies and criminals, officials claim that they were not engaging in surveillance of the Dearborn area.

This claim is troubling considering the fact that Dearborn has more people per capita on the ‘terrorist watchlist’ than any other city in the country – not to mention the damning flight data.

During a meeting Wednesday, FBI Special Agent in Charge Paul Abbate assured local leaders that the agency was not using the surveillance to target racial or religious communities.

“Contrary to the suggestion of some recent media reporting, the FBI does not employ aviation assets to conduct mass surveillance nor to target specific communities,” Abbate said. “Neither does the FBI monitor lawfully protected First Amendment activity. Further, the FBI Detroit Field Office is not aware of any specific or credible threats within the local Detroit Metropolitan area.”

The local leaders seemed all to ready placate and accept the feds assurances. They applauded Abbate for quickly addressing the situation and calmed a worrisome populace with reiterations that the federal government could be trusted.

“Due to the FBI Director Paul Abbate and his excellent relationship with this community, a trust has been built like no other probably anywhere in this country,” Ayad said. “It’s unbelievable the relationship we’ve built, to a level where he assured us this afternoon that there is no mass surveillance going on.”

Other leaders echoed the refrain.

“The community is not being surveilled,” Siblani said. “There is no mass surveillance of any nature.  We support what ever the FBI is doing to protect our country and nation, as long as they are doing it under the constitution and under the law and they are targeting criminals.”

The comments of the local leaders at the press event should be treated as suspect at the very least. Who in their right mind would trust the FBI on surveillance given its rich history of abuses regarding the First and Fourth Amendment?