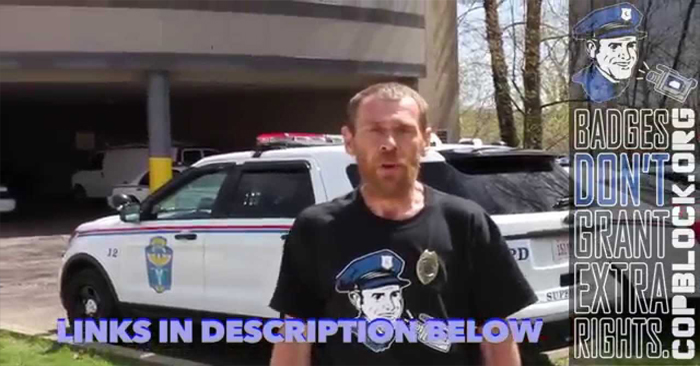 Herb Newton has had more encounters with police than he cares to remember. This week he takes two of those encounters to court as the 50 year old, lifelong Zanesville [OH] resident, faces several charges issued by ONE Zanesville Police officer – Joel Tignor. Yes, both of Herb’s cases originated from Tignor who clearly has a hatred for Herb and you don’t have to take my word for it. In the video below, you can not only refresh your memory of Herb’s arrest, but you’ll hear Tignor in his own words state his distaste for Herb.

The fact that Herb’s charges are still pending go to show that the corruption in Zanesville extends past the police department. Or, at a bare minimum, those whom work for the city are willing to stand by their colleagues no questions asked. Even when their colleagues leave a video camera running for nearly 3 hours after an arrest – which is what Tignor did when he arrested Herb in the video above. This alone (not securing evidence for several hours) seems to be an action that should have gotten Tignor disciplinary action in the first place. Yet, it didn’t, and during the time Tignor was wiretapping himself he mentions on the phone to someone (his supervisor Jon McCoy possibly – who’s also a class act, click here) that he was tired of Herb’s actions (filming ). As I stated in the blog I published titled, “Zanesville Police Arrest Man for Filming and Freedom of Speech“:

Tignor seals the deal when he forgets to shut the camera off and is recording saying, “I took care of that problem quickly.” Followed up with, “Hey, fuck him… he wants to just run his mouth. I’m not having it. I’m tired of it.” Seems Tignor believes recording the police is a ‘problem’, that needs to be taken care of quickly, and that if you want to exercise your freedom of speech, by running your mouth, he’ll abuse his power as a police officer to jail you.

The video of the interaction and arrest alone, which shows Herb actually trying to help the alleged victim and the cops doing anything but (Tignor even shrugs it off stating, “a rape that happened yesterday.”), should be enough to clear Herb’s name, but with the additional commentary by Tignor I see no choice other than for Emily Tarbert to do what’s right by dropping the charges. The Zanesville police department should also consider investigating who tampered with the footage, because they suck at it and if they’re going to tamper with evidence they should do it properly. Or they could just stop arresting peaceful people, who are merely recording them (and at times telling them off, which is NOT a crime).

Aside from Tignor’s abusive and aggressive nature towards Herb the facts of the matter in this case are simple. Herb was trying to leave the scene when Tignor told him to (even though he wasn’t legally required to) but wanted to get his bicycle first. Tignor overreacted, assaulted and arrested Herb for this. Later Tignor arrested Herb’s nephew – Richard – for merely voicing his opinion about the arrest – some call this freedom of speech. That can also be heard on video here.

Then, a little over a month ago, Tignor wrote Herb a ticket for flipping him off – something that Tignor himself does to Herb on a regular basis – but had other Zanesville police officers issue him the ticket. This charge is so ridiculous that I can’t believe the ZPD and courts are even wasting their time. As I stated in the post, “Zanesville PD Continue Harassment of CopBlocker:”

It’s been clearly established by the Supreme Court that giving the police the finger is not a crime and  I would suspect the same ruling over actual speech. This further highlights, IMO, the contempt that Officer Tignor has for Herb. It should also be noted that Herb states that Tignor has been repeatedly driving by his house flipping off Herb. Yet, no one has issued Tignor a ‘disorderly’ conduct ticket.

These two (bogus) charges have been combined and Herb is scheduled for trial this Wednesday in Zanesville Municipal Court at 9am. If, or when, Herb is found guilty he may be subjected to a $100 fine – for ‘disorderly conduct’ (flipping off a cop – J. Tignor) and up to $1,000 fine – with as many as 6 months in jail – for the obstruction of justice charge (filming the police).

Seriously. What kind of justice is this? Who has Herb harmed to warrant such attention from those who work for the city?

If you watched the entire video above – of Herb’s first arrest – you know that he was respectful to the woman accused of stealing (who later claimed to be a rape victim). Even offering to take her to the hospital, and/or for help, that’s not something you can say for the Zanesville Police officers, both of which, were more focused on Herb than they were the actual crime (theft) they were called there for.  Yet, who was more respectful or helpful is not the question on the table. The questions at hand are how did Herb “obstruct justice” while filming the police and complying with their request? And how is giving someone – even a cop – the middle finger “disorderly conduct?”

Legally speaking these charges SHOULD be easy to beat. The video shows the Herb was complying with officers orders and attempting to leave the scene. Nevertheless, if the simple facts of the day’s events can’t free Herb, the FACT that the video WAS tampered with, or that the additional audio recording show officer bias toward Herb, should bring enough reasonable doubt to the table that no judge or jury should find him guilty.

Still, I expect Herb to be found guilty for three reasons. Those working for “Zanesville” have to 1) protect their own, 2) they dislike Herb and 3) they dislike “CopBlock.” They can’t let legal facts, tampering with evidence and police harassment get in the way of their hatred.

I doubt Herb’s case will lead to the end of their thuggish ways but I plan to let the ZPD (and city officials) know of my displeasure, while highlighting their actions and supporting Herb at his court date. So join us on Wednesday (Aug 12th) at 8:00 am for Herb’s trial at the Zanesville Municipal building (located at 332 South St, Zanesville, Ohio 43701). Bring your signs, cameras and (of course) chalk because the Zanesville City officials love chalk (see video below).

Also, on Tuesday night I’ll be in Zanesville, with other CopBlockers, CopBlocking the ZPD like we have in the past – see here. If you’d like to join us we’re going to meet up at the WalMart parking lot at 7 pm. Or message the Zanesville Ohio CopBlock page here.