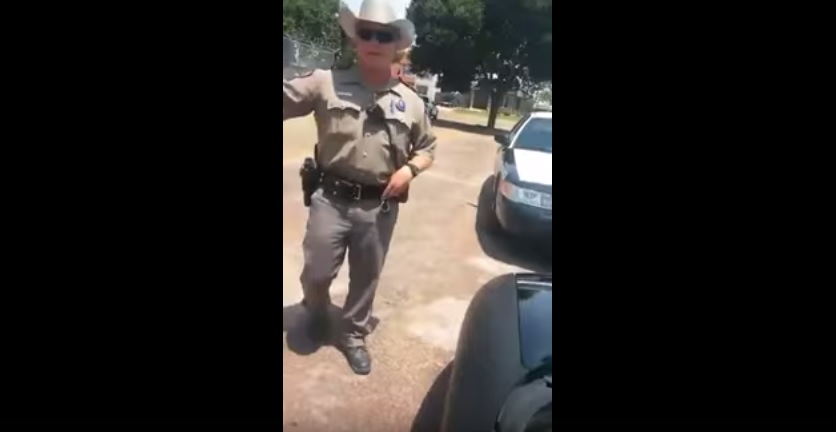 When a Sandra Bland activist by the name of Scott Fare shot the video above thinking he was going to get his 15 minutes of fame, I’m sure this isn’t what he had in mind.  This guy supposedly is part of Waco, Texas Cop Block.  That being said, I’m about to drop a bomb of truth on this guy for his reprehensible behavior displayed in the above video.

Readers have stated in the past that if we are to keep the police accountable, we need to hold our own accountable when they step out of line.  Well, folks, that is what I intend to do in this piece.  I will start by saying that Cop Block is a decentralized group and that what I am about to say here does not necessarily represent the views and opinions of everyone associated with Cop Block.

[Editor’s note: Remember “CopBlock” is merely the idea that, “Badges Don’t Grant Extra Rights” and one person’s actions cannot taint that idea, only their own image/reputation. – Ademo]

First a little background on this video.  The video was originally uploaded and then removed, but not before Tommy Johnson grabbed it and put it on his YouTube channel.  Below is the description he gives for the video.

The jerk in this video is Scott Fair, aka Scott Fare, a Sandra Bland activist camped out at the Waller County Sheriff’s Department parking lot, and was verbally attacking a state trooper on 8/1/2015. Mr. Fair, along with a couple other local instigators, have used the Bland tragedy to thrust themselves into the spotlight on TV and the internet, and to instigate racial divide. I copied this from Fair’s “Waco Cop Block” page before he took it down. The sheriff’s deputies in Hempstead brought him and his dog water while he was outside their jail protesting, and even gave him unreleased video of Sandra Bland, but he just keeps on hating… PLEASE SHARE THIS AND STOP FLAMING ME FOR SHOWING THE WORLD WHAT COPS PUT UP WITH…………..

Mr. Johnson has had to deactivate comments on the video due to the amount of hate comments he was getting because people thought it was him in the video.  Thank you, Tommy, for putting this video up.

First, let’s put the Bland case on the back burner and concentrate on this video.  In the video you do not see any evidence that this deputy was doing anything wrong.  What we do see is that within the first minute of the video, Mr. Fare is being extremely confrontational with this deputy.  He even attempts to drop Ademo’s name, maybe, thinking this is somehow going to make this deputy quiver in his shoes?

The deputy shows a lot of restraint and his posture and attitude demonstrate that he is not the aggressor in this video.  Mr. Fare continues to ramble unintelligibly, making no real point in his confrontation with the officer.  He then ramps things up a notch by claiming to be the person from Anonymous who is exposing these cops.  Between throwing the F-bomb around along with several veiled threats, it’s a wonder he wasn’t cuffed on the spot.  I do not condone violence outside of self-defense, but I am amazed that Mr. Fare didn’t get the ever-living shit beat out of him for his behavior.

I hold a strong belief that, as a Cop Blocker, you film to create an objective record of police interactions.  Your job is not to interfere or inject yourself into the situation.  Your job should be to change the hearts and minds of the public through education.  No good comes from shouting profanities and threatening officers.  We cannot change the behavior of these officers if we have people out there doing the same shit that we accuse them of.

Mr. Fare makes a comment halfway through the video, saying, “This is going to go straight viral.”  It probably will, but not for the reasons he thinks it will.  I highly doubt that any decent human being would find anything noble in this guy’s display of complete asshattery.  I have touched on the subject before about how I feel people should conduct themselves when filming the police.  This guy just doesn’t get it.  I’m disgusted that this guy claims to be a part of Cop Block when, in my eyes, he appears to be a punk with a camera trying to get noticed on the Internet.  Mr. Fair, from one cop blocker to another, find something else to do, as I truly believe that cop blocking is not a good fit for you.  Perhaps start with some anger management classes. In an interesting twist of events, Mr. Fare was arrested after a high-speed chase on August 5, 2015 after a verbal altercation took place in which he allegedly made death threats toward county jail personnel.  When they attempted to take him into custody, he got in his car and drove off while dragging McLennan County Deputy Steve Smith and causing injury to him.  The pursuit lasted 40 minutes and even required the assistance of an eight-dog search unit, as well as a helicopter, to apprehend him.

He was ordered held at the McLennan County Jail Wednesday on bonds totaling $245,000 and charged with four counts of aggravated assault on a public servant, two counts of evading arrest, and one count of making an abusive 911 call, online jail records showed.

I have no sympathy for this guy, as he violated the non-aggression principle both when he threatened harm and when he actually caused injury to human beings, even if they were cops.  His actions do nothing to help the cause of police accountability, but rather bring a negative spotlight on a movement that many of us hold near and dear to our hearts.

I am going to put myself on the record by saying that I condemn the actions of Mr. Fare shown in the video and the actions that resulted in his arrest.  Mr. Fare, I hope that you are prosecuted to the fullest extent of the law, but I also hope that you learn something from this experience and become a better person from it.  We are all responsible for our own actions and when you decide to cause harm to another person, you deserve your day in court to face the consequences.  Enjoy your fame, douche bag.