The interaction took place on Wednesday August 5th, 2015 with unidentified employees of the Northampton County Sheriff’s Department in Bethlehem, Pennsylvania.

As I was driving home from the store I saw a sheriff’s vehicle driving down the street with no headlights. I decided to follow them and confront them about the lights. What I ended up stumbling upon when I caught up to them was SHOCKING.

They were conducting an illegal search of Feliz Auto Repair’s property. It was clear that their search was being conducted without a warrant, and it was after regular business hours, so no one was even there to serve a warrant to. They were using flashlights to peer through windows and were about to start checking out the back when I paused their search by confronting them. That was when things got even more bizarre.

The officer played dumb and acted friendly until he saw that I was recording AND wearing a Copblock shirt. His attitude instantly changed from friendly to Uh-Oh…BUSTED! Both officers refused to identify themselves. After several loud attempts to get their names they sped off, nearly hitting my car in the process.

As I began to follow in my car, they ran a stop sign and began speeding through town to escape me. By the time they got to the highway they were reaching speeds of nearly 90mph. No emergency lights or sirens were ever activated during their high speed jaunt. I suspect that is because they would have activated their own dash cam by doing so. They were blatantly putting other motorists in danger by rapidly switching lanes with NO SIGNALS while SPEEDING. I decided to back off and took the next exit. I had already gotten their license plate.

The next day I went to Feliz Auto and spoke with Balmix Feliz, the owner of the establishment. He was shocked to see the video and commented, “I don’t understand why they would do that. We are open all day. Why couldn’t they come during business hours if they needed something?”

Ill tell you why….. because they didn’t want any witnesses to their actions, whatever those shadowy deeds might have been 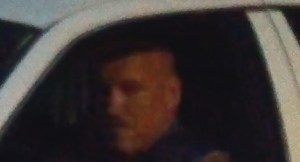 I also called the Northampton County Courthouse and spoke with Sargent Volpe (supervisor). Mr. Volpe was less than forthcoming about the officer’s identity. When I explained the reason I needed the information he said, “You will have to come in person to get anything.” When I told him that I would come but I wanted to have cameras rolling, he became hostile. He then told me, “I will not be filmed. Its a federal offense to film me without consent.”

WRONG! Not only is it NOT a “federal” offense, ITS NOT EVEN A STATE LAW! In fact 18 Pa. Cons. Stat. Ann. § 5702 says that its VERY LEGAL to film ANY government employee in public without consent.

So I will be filing a complaint AND I will film it!

Somebody must protect the people and their property since it has become clear that Northampton County Sheriff’s Department does not know the law, nor respect the rights of citizens.