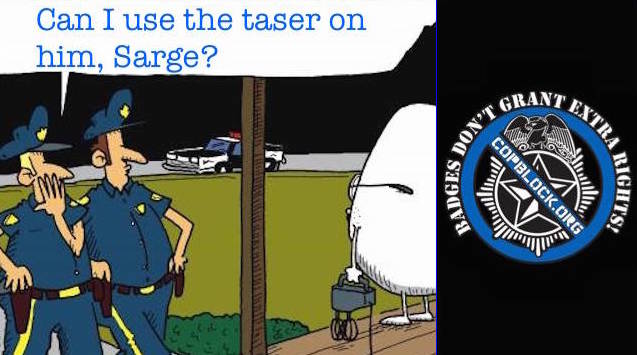 On the night of Thursday August 6th, 2015, DeKalb County Police in Georgia were conducting a ‘robbery suppression detail’ on Flat Shoals Road when they pulled over an as-yet unidentified man and his passenger. The driver warned police that he had a weapon in his possession. While officers secured the mans weapon, the passenger fled from the car, initiating a foot chase.

The fleeing passenger encountered an eight foot wall, which he then tried to climb over. As he was doing so an officer employed his taser, hitting the man and causing him to fall from the wall to the other side.  Officers made their way to the other side of the wall the man was unconscious.

A witness report from NBC11 Alive in Atlanta states:

“I saw a man on the ground with his hands behind his back. He wasn’t responding at all so when the police officer rolled him over clear fluids ran out his mouth and that’s when I said, ‘He’s not breathing, he’s not breathing.'”

At this point the officers handcuffed the man and called for medical emergency responders who arrived in about six minutes. They transported the man to a hospital where he was pronounce dead a short time later.

Another witness at the scene recorded the incident with his cell phone. While doing so he yelled a warning to the fleeing passenger not to run or he would be shot. That video has been taken into evidence and is not yet available for public viewing.

Neighbors are shocked an upset by the incident. Not only are they upset that police did not attempt to give the him first aid instead of handcuffing the clearly injured man. Police also prevented neighbors from providing any medical care for him as he lay dying.

Every child learns the tale of Humpty Dumpty, the Eggman who could not be put back together again after falling from a wall. It does not take a genius to understand that using an electroshock weapon on a man who is balanced precariously at a height will have a similar effect. The victim of this careless brutality and excessive force will never be put back together again, while those who sponsored his fall with their carelessness or wickedness have shown through both their actions and inactions that they don’t really care if a citizen lives or dies if that citizen does not acquiesce to them like some sort of mindless automaton. And even then, sometimes…

Could it be that cultural conditioning and training have made those who work in law enforcement automatons themselves, who cannot empathize with the instinctual reflexes of self-protection when practiced by others, or are unable to fathom free will because they themselves have little to none left?

The cry to TRAIN THE POLICE MORE seems to be blindly ignorant to the fact that these monkeys are already so over-trained and completely conditioned that their inability to reason for themselves has turned them into the instinctual predatory killers that they are? You shouldn’t ever have to be trained in how to NOT kill people. The fact that we think that is necessary to do so with the police fully illustrates that we really don’t think that those individuals are intelligent or compassionate enough to be given the powers our foolish support vests in them for this suicidal system of protection.