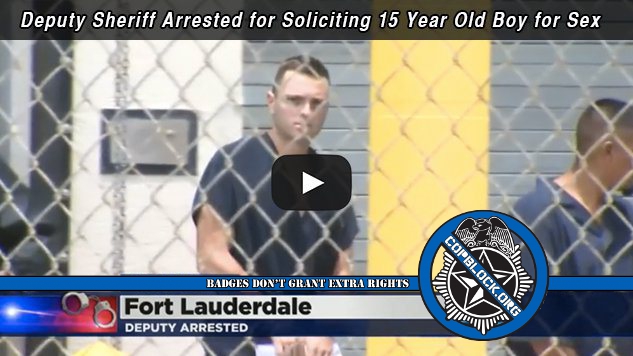 FORT LAUDERDALE, FL – A Paso County Deputy was arrested on Tuesday night after showing up to meet a 15 year-old boy he met online for sex. The former deputy, Matthew Bondi, is now facing federal charges.

According to the criminal complaint, Bondi began sending graphic sexual messages to the boy using the online apps Snapchat and Kik. Once the boy’s mother found out about the illicit messages from the deputy, she contacted Davie Police immediately.

Once the case was turned over to the Davie Police, a detective from the department started posing as the teen boy and continued to exchange messages with Bondi.

According to investigators, Deputy Bondi used the alias “John” on Snapchat and Kik when talking to the teen boy. After sending a naked picture to the boy’s phone accompanied by the message, “Hey I’m in South Florida,” Bondi arranged to meet the teen boy at Pine Ridge Plaza at 8:00pm.

Once he showed up in his black F-150, the Davie Police immediately took him into custody.

Having only worked for the Paso County Sheriff’s Office for around nine months, Bondi was still on his probationary period so he was terminated immediately.

“There was no question we had to take swift action to make sure he was no longer associated with the Pasco County Sheriffs Department,” Pasco Sheriff Chris Nocco stated.

Sheriff Nocco asked anyone in the public who has had any unusual contacts or problems with Bondi to call the Pasco County Sheriff’s Office immediately.

Bondi is scheduled to show up to court on Friday for a bond hearing.