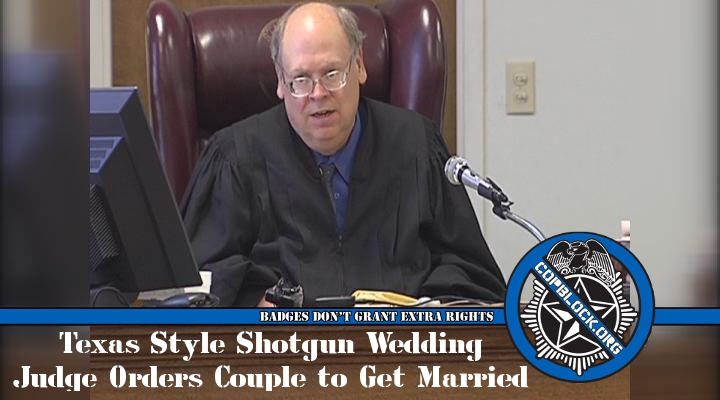 Does anyone remember back in the day when defendants were given a choice of joining the military or going to jail?  It seems that a Texas judge has upped the ante and has come up with a new kind of punishment that is reminiscent of that or the old shotgun weddings.

Josten Bundy had gotten into an altercation with his girlfriend’s ex-boyfriend in which no injuries were sustained.  This didn’t stop the ex from pressing charges for assault.  As part of a probation agreement, Josten has been ordered to marry his 19-year-old girlfriend or face 15 days in jail by Smith County Judge Randall Rogers.

Mr. Bundy was prepared to take the jail time; I mean who wouldn’t, but was told that he could not contact his work to let them know he would not be in while he was incarcerated.  In an effort to strong-arm Bundy, he refused to let him make one simple phone call.  He was also ordered to write bible verses and get counseling.

The couple had already planned to get married, but were hoping to save up for a big wedding where family and friends would be able to attend. Instead, they were forced to get a marriage license on the spot.

It is now being questioned as to whether this judge’s orders are even legal.  My guess is that they are not.  We now have a question of separation of church and state, freedom of association, and so many other issues that this judge seemed to ignore in making these orders.  The courts are showing us all more and more that justice is the last thing that they are concerned about.  The courts are more interested in imposing sanctions against ordinary citizens to further their own twisted agenda.

In a story from KLTV news, the question of the legality was raised by a legal expert:

“To say you’re not going to be criminally punished if you get married is way out of left field,” attorney Blake Bailey told KLTV. “It sounds like the old days of shotgun weddings, but not even the judge is capable of enforcing, what he thinks is best for some people in his court.”

The government from local, state, federal, and the courts are abusing their powers with each breath we take.  This story demonstrates that these elected officials have no concern with the basic rights that people have and will use their power to impose their own will on each of us.  The courts continue to fail to hold corrupt police officers accountable, but have no problems messing with the lives of everyday citizens.

I for one am sick of these government officials thinking that they can decide what’s best for everyone.  If you feel that this judge is out of line, feel free to contact his office.  Make it known that the courts were not designed for judges to impose illegal orders on citizens.

Contact the not so honorable Randall Lee Rodgers at: