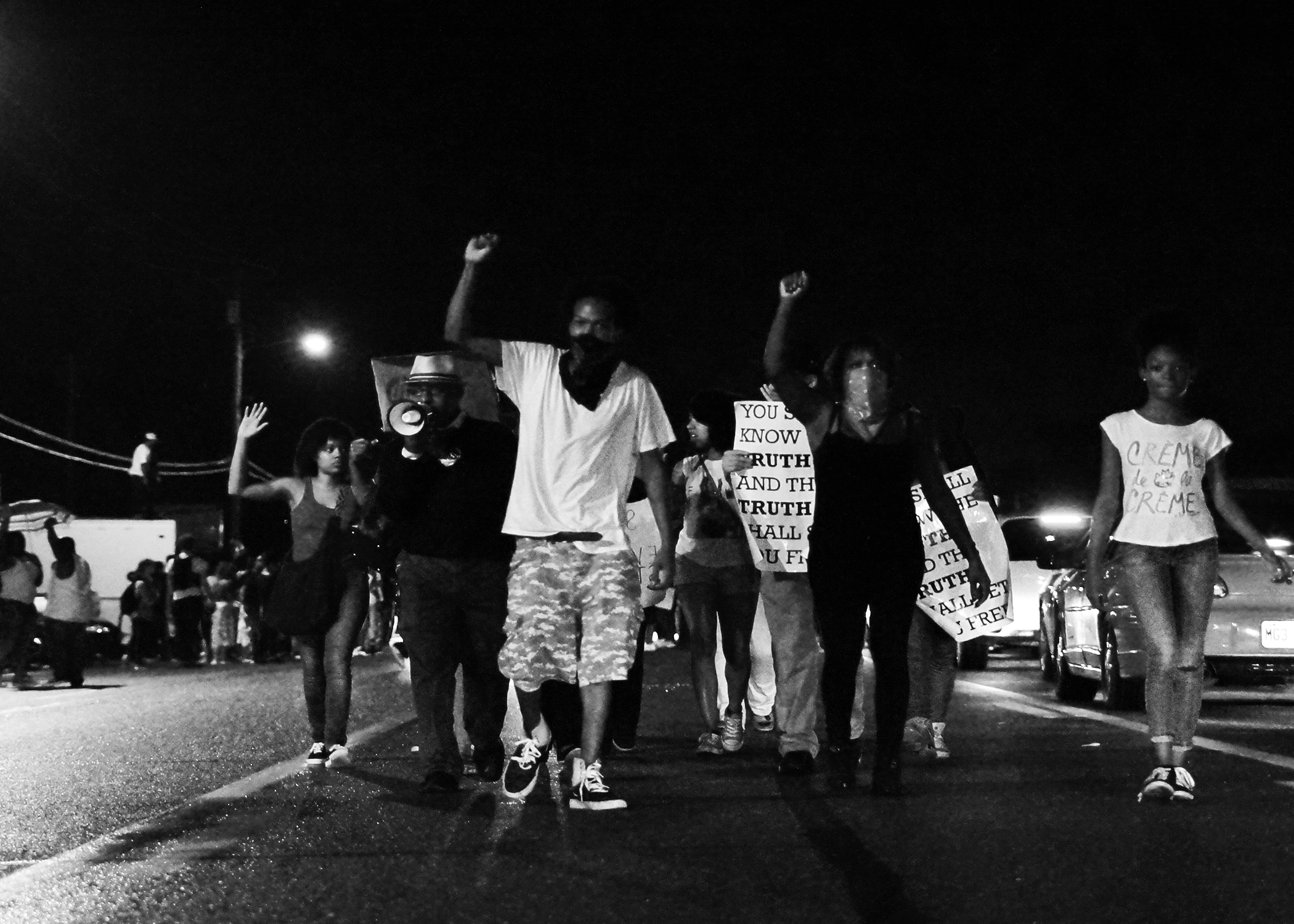 August 9th, 2016 marks the one-year anniversary of Darren Wilson’s killing of Michael Brown in Ferguson, Missouri. As is standard operating procedure when a killer happens to wear a police badge, Wilson has faced zero responsibility for his crime.

Ferguson residents, if you decry the double standards afforded to Wilson — if you have sought a positive change through marches, rallies, petitions, videos and other avenues but have been ignored; if you recognize that calls for “patience” were made only to placate; if you have been harassed and have experienced substandard “service” from Wilson’s colleagues — choose not to fund the Ferguson Police outfit.

Put your money where your mouth — and conscience — is.

Take a page from the war resisters – individuals who strive for peace and justice via a “nonviolent revolution.” Many war resisters recognize the very real harm of democide and choose not to pay 45% of their federal income tax, which is the amount of the federal budget believed to advance the war machine. In Ferguson, the police budget accounts for over 42% of the annual expenditures. If you’re a Ferguson resident unsatisfied with the “protection” of the police, then don’t fund them. Withhold 42% of what you would otherwise pay in taxes. Choose not to furnish your oppressors with the means they require to oppress you — namely your consent and your wealth.

The Ferguson Police outfit’s stated mission is to deter criminal activity and provide for the protection of life. Clearly they have fallen quite short. In fact, they’ve done the opposite. In spite of their failures, they’ve continued to grow in both size and scope, as all police outfits are incentivized to do.

In absolute dollars, the budget of the Ferguson police ratcheted up a whopping 12% between 2011 and 2014, from $4,737,743 to $5,282,900. In addition to “patrol” functions (which include the salary of folks like Wilson), Ferguson police have recently spent the money stolen from their “customers” on new vehicles, new handguns, new surveillance cameras, new laptops, salary increases, and renovation of their headquarters.

[If you’re in Ferguson, be sure to connect with The Canfield Watchmen]

Take note too that 20% of the operating budget of the corporation known as “Ferguson” comes from ransoms — extortion notes written for activities almost always lacking a victim. If you’re targeted with such foolery — given a “speeding ticket” or “red light ticket” — don’t automatically pay it. It’ll only encourage them, as is evident by Ferguson police’s promise of “more aggressive code enforcement” (pg. 15).

This tactic — that of not funding self-proclaimed rulers — is rarely discussed, and for good reason. The voices on mainstream news, within bureaucracies, and among politicos purposely keep the option of de-funding off the table entirely. Despite what they may say, they don’t desire any real change to the structure of the corrupt institutions upon which their livelihoods depend. When you choose not to adopt the paradigm created and pushed by those folks, you’ll naturally look for other input, and choose to think for yourself. That is dangerous to those who purport to be your rulers.

In a write-up about the one-year anniversary of Michael Brown’s homicide, Reuters chose to highlight not the lack of justice thus far, but to peddle fear. Their headline reads “Ferguson braces for protests.” Over at FoxNews, the Ferguson commentator is the head of a pro-police legal defense fund. He unsurprisingly belittles those who take issue with the rampant misdeeds done by police employees. Such content does nothing to address the problem. It only distracts from the truth — that every police employee claims the “right” to steal money from their neighbors — to “tax” them — in order to provide a service. With a foundation like that, it’s little wonder that we get what we see.

Hell, even in a recent post here at CopBlock.org on the one-year anniversary of Wilson’s aggression, the author chose to compare the skin melanin levels of Ferguson residents and the areas self-proclaimed “rulers,” citing “racism” as a focal issue. While some may call this progress, it grossly ignores the root cause of the problem.

Only when each of us in Ferguson — and Oakland, and Austin, and Johannesburg, and Madrid, and Jakarta, and at any place around the globe — choose to strike the root will we finally be free of the institutionalized violence that took Michael Brown’s life one year ago.