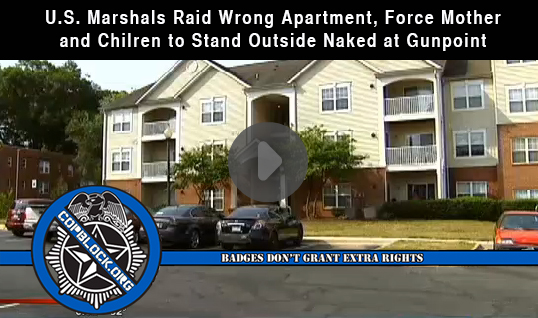 A Washington, D.C. woman is traumatized after U.S. Marshals mistakenly raided her apartment in the early AM hours this past Thursday morning.

Hannah Lanes, her daughter, and her 4-year-old son were still sleeping when they heard a knock on their door at 6:30 AM on Thursday but when her daughter went to see who it was knocking on the door, one of the officers had apparently covered the peephole.

Before her daughter had any time to react, eight U.S. Marshals burst open the door with their guns drawn and pointed at the family inside.

Being held outside at gunpoint by the U.S. Marshals and wrapped in only a bed sheet, the mother, still unaware of why police were even at her apartment, screamed to the officers that her 4-year-old son was inside. She begged for them not to hurt him. ‘Please don’t shoot my son,'” she pleaded.

Eventually, one of the U.S. Marshals noticed something wrong.

At that moment, both Hannah Lanes and her daughter exclaimed, “No!”

“Oh, we have the wrong house,” the Marshal replied.

Lanes and her family live in room 201 which was marked clearly on the door. “So we’re standing outside with no clothes on, shaking, crying, scared. Guns have been pointed at us from the time we wake up and they have the wrong house,” she said.

The U.S. Marshals, showing NO warrants, had meant to perform the surprise raid on the neighboring apartment.

After the horrifying incident that will most likely leave the Lanes family terrified of police for the rest of their lives, the U.S. Marshals nonchalantly admitted to their error and released a statement basically patting themselves on the back and minimizing the situation.

“Annually, the U.S. Marshals arrest more than 100,000 fugitives, with the safety of the public and law enforcement personnel as an utmost concern.  Whenever U.S. Marshals deputies and task force officers enter private residences, they do so in accordance with the laws of the United States.

Today, while serving both a search warrant and an arrest warrant for a fugitive wanted for First and Second Degree Child Sexual Abuse, USMS task force members mistakenly breached the door of a neighboring apartment.  Immediately thereafter, the fugitive was apprehended in his nearby apartment.  USMS personnel notified building management, who then repaired the door locks and provided the occupant with new keys prior to the USMS personnel leaving the scene.

At this time we cannot comment on potential or pending litigation.  However, any member of the public who believes that their property has been damaged as a result of a USMS operation may submit a claim under the Federal Tort Claims Act.”