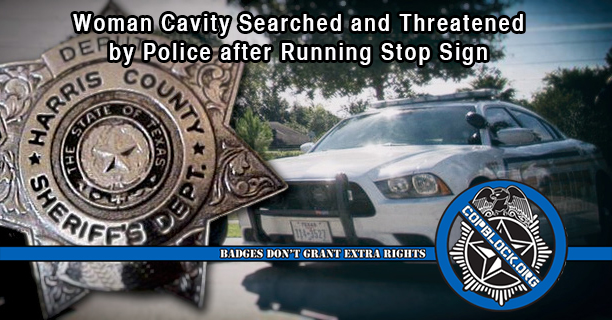 A Houston, Texas woman was on the way to the store to pick up medicine for her sick mother when she got pulled over by a couple of sadistic cops who decided to turn the routine traffic stop into a sick and twisted nightmare.

According to the Harris County Sheriff’s Office, the 21-year-old driver, Charnesia Corley, was pulled over and detained by a sheriff’s deputy for failing to completely stop at a stop sign.

After stopping Corley, one deputy “asked” her to step out of the vehicle after he claimed that he “smelled what he believed to be marijuana” coming from the car. Corley was then placed in handcuffs and locked in the back of his patrol car so he could do a search of her vehicle without her consent.

When no marijuana was found in the search of Corley’s car, the deputy returned to the patrol vehicle where she was handcuffed and told her that now he smelled the marijuana in there.

According to Corley, the deputy called a female deputy to the scene, who upon arriving, ordered her out of the vehicle into a gas station parking lot.

“She tells me to pull my pants down. I said, ‘Ma’am, I don’t have any underwear on.’ She says, ‘Well, that doesn’t matter. Pull your pants down,’” Corley said.

When the female officer demanded that Corley “open her legs,” Corley admits that she hesitated and told the officers that she didn’t want to.

The female deputy then stated to Corley, ‘”Well if you don’t open them, I’m going to break them,” Corley said. “All I could do was just lay there. I felt helpless.”

Corley insists that she did not consent any of the unwarranted, non-consentual searches.

“I bend over and she proceeds to try to force her hand inside of me. I tell her, ‘Ma’am, No. You cannot do this,'” Corley stated.

Because Corley didn’t immediately submit to the non-consensual, publicly-humiliating vaginal search, the deputy charged her with resisting arrest.

Thomas Gilleland, a spokesperson for the Harris County Sheriff’s Office, stated that the deputies “did everything as they should,” pointing out in the police report that one of the deputies even wrote that “we could strip search her if we needed to.”

According to investigators, the deputies claim to have recovered .02 ounces of the non-lethal plant during the search they say she gave consent to.

On top of the charge of “resisting arrest,” Corley was also charged with possession of marijuana.

What’s odd about the account from the police officers involved is that Corley “consented” to the search but also “resisted arrest” because she didn’t consent to the search.

That begs the question – did police actually find marijuana? Or are they making that up too?

The story’s blatant inconsistency AND the fact that the Harris County Sheriff’s Office keeps deleting comments on their Facebook page about the incident leads one to believe that perhaps the sheriff’s office isn’t exactly telling the truth.