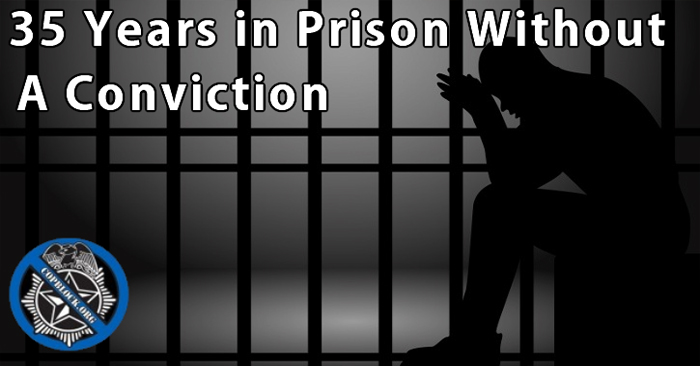 Jerry Hartfield was only 21 years old in 1977 when he was convicted of the murder of Eunice Lowe and sentenced to death. In 1980, the Texas Court of Criminal Appeals overturned his conviction because of the method by which jurors were selected. Three years later, Hartfield’s sentence was commuted to life in prison by then-Governor Mark White.

Let’s state that again: Hartfield was convicted in 1977. His conviction was overturned in 1980, which means he should have been a free man at the time. However, Hartfield remained in jail, and 3 years later, the governor commuted his sentence to life in prison.

How can a governor commute a sentence when there is no conviction? Surely someone would have filed some type of paperwork to have Hartfield released, right? Nope. As it turns out, Hartfield wasn’t even notified that his conviction was overturned, and that there was no sentence to commute, until 2006 – 29 years later.

One of the issues at hand is Hartfield’s IQ.  Hartfield’s IQ scored at only 51 (though the State’s psychologist assessed his IQ at 67), which is below the threshold of 70 when defining mental impairment/disability.

So who’s to blame in this mess? If you listen to Matagorda County District Attorney Steven Reis, Hartfield himself is to blame. The DA, in order to relieve his office or the State of Texas of any responsibility, stated that Hartfield “bears some responsibility for not filing (paperwork) for nearly a quarter-century.”

How can a DA, whose job it is to make sure that constitutional violations like this do not occur, blame a mentally incompetent man for wasting away in jail for the last 35 years? Even the State District Judge, Craig Estlinbaum, stated that the state’s negligence caused a 30-year delay in bringing Hartfield to trial, but went on to blame Hartfield by saying he “failed to present a clear, unambiguous demand to the trial court for a speedy trial.” It’s also worth noting that once Hartfield’s death sentence was commuted, his lawyers stopped representing him, leaving the mentally disabled Hartfield to contend with the legal system all by himself.

Regardless of the fact that the state has kept a mentally incompetent man locked behind bars, with no conviction, for over three decades, Texas still plans on retrying Hartfield for the original murder charge. If this sounds a little far-fetched, well, it’s only the beginning. The state no longer has any evidence to present at trial. The murder weapon can’t be found, the car where the murder took place no longer exists, and as far as witnesses go, most of the 125 potential witnesses are either dead or can’t be found.

If you are wondering if Hartfield was innocent or guilty of the crime of which he was convicted, that’s a hard question to answer. One of the reasons his sentence was overturned in the first place is that the judge removed at least one juror who was NOT in favor of the death penalty. After the trial was over, the jury foreman was overhead saying the jurors were “all farmers and ranchers down here, and when one of our animals goes crazy, we shoot it.”

The only thing in Hartfield’s favor is a potential conviction (yes, I said conviction). If he is convicted this go-around, he’ll be instantly eligible for parole under the Texas law that was used at the time of his original trial.

284
SHARES
FacebookTwitterGoogleRedditTumblr
DiggLinkedinStumbleuponMailPrint
You Can Support Cop Block by shoppping on Amazon using the banner below:
BANNERS ARE CLICKABLE