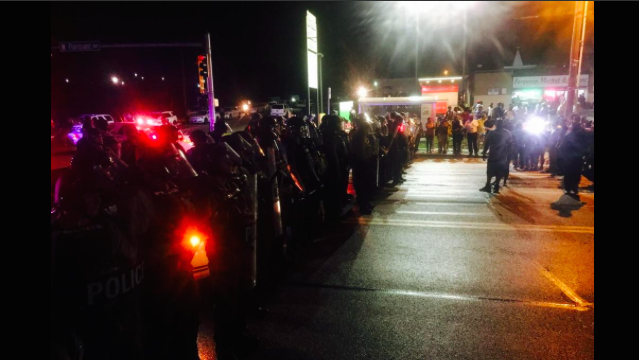 This article is being updated live as events unfold. Check back periodically or refresh to get the latest.

Initial reports out of Ferguson on Twitter and other social media outlets are claiming a man has been shot by police in Ferguson during a protest for the one year anniversary of the police killing of Michael Brown by Officer Darren Wilson.

Reports also indicate that a man who filmed it was arrested immediately after.

3:00am- The shooting victims father has identified him as 18-year-old Tyrone Harris. He was a close friend of Michael Brown.

2:30- Police officials held a press conference. Chief Jon Belmar spoke.The shooting victims name is still not known. He is listed as in critical unstable condition and in surgery. Police claim that this was the same individual whom they allege fired at officers during an investigation. The gun supposedly used by the suspect had been reported stolen. The officers involved were plainclothes and detectives, who lucky for Ferguson PD, do not wear body cameras. Nor were dash cams in operation. Officers fired at the man from inside a vehicle.

2:15am- Social media reports from Anonymous and others are saying that more shots have been fired.

2:00am- It is now being reported that 2 people were injured in the earlier gunfire.

This Facebook Video shows a man lying on the ground and the arrest of the man who is taking the video.
See more videos and get updates from the ‘Justice For Us All’ Facebook Page.
Here is another video where you can see people scramble as many gunshots are fired.

Ferguson Police Department is claiming that the officer involved in the shooting had come under heavy gunfire before returning shots. No word yet on whether the man shot was related to that gunfire. Witnesses did report hearing a number of shots at the time of the incident.

The apparent sister of the shooting victim was heard screaming, “Why did they do it?” and “They killed my brother!”

The man who was arrested for filming the incident cried out for police, who are trained first responders, to help the fallen man. Although his cries and those of others like him fell on deaf ears. This seems to be one of the things upsetting those on the scene and in social media reports the most.

The man arrested for filming has been released and has injuries from officers.

The last known report is that the shooting victim was still alive when taken by the ambulance. At 1:30am Monday police have called the protest unlawful and are threatening use of chemical weapons if protestors do not leave the area.
Some reports say they have already been used, though not on a widespread scale.
See video of tanks moving in right HERE.

At 2:00 am it is being reported that teargas is being fired on the crowds, as well as runner bullets, from a militarized police with tanks.

We will update this post as more news becomes available. The claim by police is that the shooting victim approached uninformed officers in an unmarked car and fired at them. Yet if these officers were not recognizable as such, why would he have been shooting at them? And where is evidence of the weapon? Is it a bit too convenient that it was a stolen weapon that was used? There are a lot of questions at this juncture and the answers we are being given only raise more questions. Read our most recent article on the topic HERE.