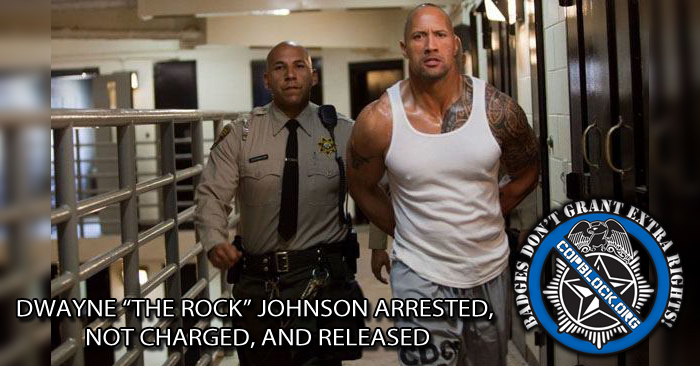 [EDITOR’S NOTE: I (Ademo Freeman) failed to check the source closely when I posted this article earlier today. The source, TMOSocial.com, is a site geared to post satire and/or fake pieces primarily to promote a product. In this case it was the supplement that was blamed for the arrest in the first place. On behalf of DEO (author) and myself we apologize to Dwayne “the Rock” Johnson and the readers for this mistake – though we fully supported his right to trade supplements without harassment. And though the arrest is fake the points surrounding the drug war and harassment of people for voluntary exchange of goods are most certainly valid. Again, our apologies.]

Dwayne “The Rock” Johnson was arrested last night after a resident notified police that a tall man had handed another man pills.When officers arrived at the scene, The Rock became increasingly upset when when police officers told him “Your celebrity status does not put you not above the law” and booked him.

The Rock was released the next day without charges. The LAPD released a public statement stating , “We’d like to apologize to Dwayne Johnson for the inconvenience. Any time the LAPD receives a call, it is our responsibility to make sure it is treated in the most serious manner. For the record the pills found in Dwayne Johnson’s Fanny Pack were in fact not schedule two narcotics.”

This type thing screams “End the drug war immediately!” The pills Dwayne had were legal supplements first of all, so the person who made the call probably just saw it was “The Rock ” and thought he could make a quick buck off reporting it. The interesting thing to me is how Mr’ Johnson immediately goes to blame himself for the LAPD’s over reaction over a few pills. How many times have you handed your buddy off some advil or aspirin or something like that? Tic Tacs perhaps? Would you justify a SWAT raid over handing your friend a couple Tic Tacs?

But to blame yourself for giving your friend his vitamins is ludicrous. You did nothing wrong Dwayne! The Rock is quoted as saying,

“The LAPD was just doing their job. I guess it wasn’t the brightest idea to hand my friend, a few of my Elite 360 and Ultimate Muscle muscle supplements in broad day light. They’re completely legal by the way guys.”

We’ve reached out to our friends at the Creative Artists Agency to get the scoop on Elite 360. Our insider at the CAA told us why Elite 360 is so common in Hollywood & Athletes:

“Athletes and actors have very busy schedules, they don’t always have time to maintain their bodies. Their lives are fast paced, so Elite 360 is the ideal bulk up solution for them. They don’t have to change their diet much or exercise hardcore daily to maintain their bodies. Almost 70% of all actors who need to get cut up bodies’ for new movies are on the Elite 360 muscle toner to get extra muscle in short periods of time.”

Just doing their jobs? I find no fault in what you did my friend. Nor would I care if you were on steroids. This typical overreaction by police over drugs has set us back years of evolution. It was the finest of ideas. How else could you see for yourself how ridiculous this police state is? Adam Kokesh was here in Cleveland this weekend. He spoke of the drug war on Marijuana and How could you, as a police officer, know that marijuana is practically curing people of seizures and Multiple Sclerosis symptoms, and still want to keep it away from people who need it? Some children are born with life long seizures. Marijuana is cutting their suffering by 70% in a lot of reported cases. Adam and I are on the same page with this one because I too find it appalling.

It is no ones business what substance or substances you put in your body. So don’t blame yourself Dwayne. Go get high all you want, take whatever you like.  But expect swift and severe punishment if you hurt someone or damage someone’s property because of your ignorance while on your drug of choice. I had said it before and I’ll say it again, stop treating drug addiction and abuse as a crime and start treating it like a disease, and maybe there’s a chance to win a war on drugs. At least very least we can call it a draw and start getting the people the help they need on all sides of the discussion.