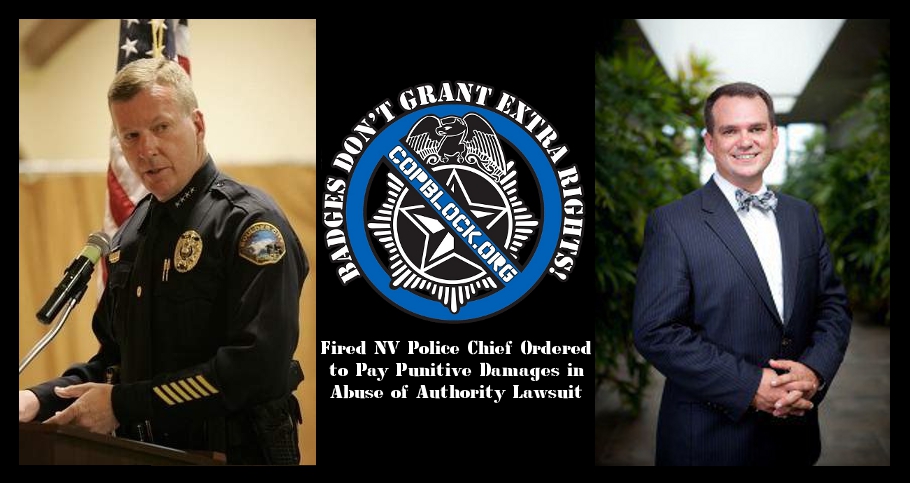 On July 28th, Thomas Finn, the former chief of police for Boulder City NV, was ordered to pay $10,000 plus attorney’s fees to Las Vegas area attorney Stephen Stubbs. The judgment stems from a lawsuit Stubbs had filed over abuses of authority Finn had engaged in during his time as the chief of police, as well as the malicious filing of a lawsuit by Finn against Stubbs after he initiated an investigation into those abuses of authority.

All of this originates from a campaign to harass and manufacture traffic charges against the Mongols motorcycle club during a national event they were holding in Boulder City in June of 2012. Former Chief Finn instructed Boulder City police officers to figure out any reason they could to stop and cite or arrest members of the Mongols. He also sent a letter to Judge Victor Miller, the sitting judge in Boulder City, informing him of their plans to harass the Mongols and asking that he not allow plea deals for any charges resulting from that harassment campaign.

In addition, on June 11th of 2012 Finn sent an e-mail to Boulder City police officers asking them to delete all emails related to the intentional harassment of the Mongols. That e-mail explicitly stated that they should do so in order to avoid releasing them in the event that a public records request was filed. This, of course, was a violation of the Nevada Destruction of Public Records Statute (NRS 239.230).

After Stephen Stubbs, who represents the Mongols, received a copy of that email anonymously, he initiated an investigation against Finn with the Boulder City Council and Nevada Attorney General’s Office. As a result of that investigation, Finn was fired as the Boulder City Police Chief, although he was not charged with a crime because, unbeknownst to him, all city emails are backed up on a separate hard drive and the emails he ordered to be deleted (and that were in fact deleted) were able to be recovered.

In other words, a loophole saved him from being punished for the crime he actually committed. Not that people should expect anything more than a whitewash of crimes by the police from Clark County District Attorney Steve Wolfson. Subsequent to Stubbs’ initiation of the investigation that eventually led to his firing, Finn began engaging in a series of retaliatory acts that included wrongful use of confidential information, as well as filing a false and malicious lawsuit against him relating to the anonymous source of the email instructing officers to delete evidence of his campaign to harass the Mongols.

After acquiring a laptop belonging to Stubbs and containing personal, confidential information belonging to Stubbs, as well as his clients, from Lisa Lemley, a former employee with Stubbs’ law firm, Finn began writing to the FBI, Nevada State Bar, and IRS in failed attempts to compel those agencies to investigate him for fraud and money laundering. All of those allegations were subsequently found to be without any merit.

Next Finn filed a lawsuit against Stubbs, the city attorney, and two members of the Boulder City Council. Ironically enough (in light of his own participation in the theft of the laptop belonging to Stubbs), the lawsuit was based on the contention that the email in which he instructed police officers to illegally destroy evidence of their intent to harass the Mongols was confidential information that had been acquired illegally. This lawsuit was quickly dismissed on anti-SLAPP grounds.

Stephen Stubbs also had filed a series of lawsuits himself on behalf of the Mongols and Stray Cats motorcycle clubs, as well as the Nevada Confederation of Clubs, over the harassment by Finn and Boulder City Police.

On July 30th, Clark County District Judge Pro Tempore Barbara Johnston ruled that Finn’s lawsuit was filed as retaliation for his firing as police chief and that he had abused his authority in order to acquire Stubbs’ personal laptop and by using it to try to initiate investigations against him by the FBI, Nevada State Bar, and IRS. As part of that ruling Stephen Stubbs  was awarded $10,000 in punitive damages plus legal fees, which could amount to as much as $50,000.

In that ruling, Judge Johnston stated that Finn’s lawsuit against Stubbs and his co-defendants was clearly filed in retribution for the investigation of Finn’s own misconduct. In addition, she states that Finn’s obtaining of Stubbs personal laptop and the “subversive and probably illegal use of the data on it” represents “outrageous conduct, with a conscious disregard” for the impact his false accusations would have and “malice aforethought.”

Judge Johnston further concludes that Finn’s attempts to initiate an investigation against Stubbs by the IRS, FBI, and Nevada State Bar were “oppressive and despicable conduct that subjected Stubbs to cruel and unjust hardship with a conscious disregard of the rights of Mr. Stubbs.”

Obviously, it shouldn’t be hard to see who is (very much) in the wrong in this whole affair. Former Chief Thomas Finn is the prototypical Las Vegas area corrupt politician and the head of a prototypical Las Vegas area police department that are well known for having no regard for rights or the actual law. By all rights, Finn should actually be facing charges for his criminal acts of misconduct before and after his firing, but expecting Clark County District Attorney Steve Wolfson to go after the many corrupt politicians or police in Las Vegas is just setting yourself up for a disappointment.