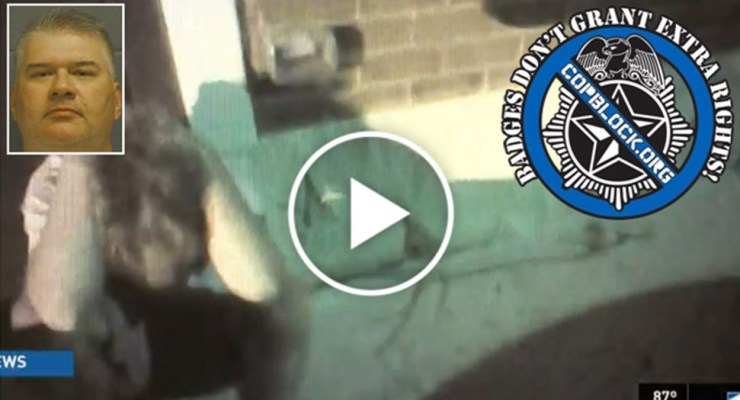 Police reports say officer Jonathan Fraser responded to a report about an intoxicated man on the night of June 13 and found 19-year-old University of Georgia student Michael Roquet – who he said “refuse[d] to comply with his orders” while he was trying to arrest him.

Fraser claimed Roquet “struck [him] with his left elbow in [his] chest,” and then “hit [him] again with his elbow.] The officer says he responded by “striking [the man with a baton] in the leg and upper body” and then handcuffed him.

After reviewing body-cam footage from the incident however, investigators concluded that Fraser used his baton to hit Roquet nine times, including once in the head and twice while he was on the ground – and then lied about it.

Investigators found that Fraser never reported that he used his baton to hit Roquet in the head – which is considered deadly and excessive force  – and then “denied striking [him] in the head with the baton” and attempted to “mislead investigators” about what had actually transpired.

“[Roquet was] not resisting at that point [when] he is on the ground,” Police Chief Scott Freeman said. “That is unauthorized use of force, absolutely.  And that is something that is completely intolerable, and something we’re not going to put up with, and we dealt with it appropriately.”

Investigators also asserted that Fraser violated department policy by not notifying medical personnel that Roquet had a head injury and “used hard control strikes from an impact weapon… on an individual who was actively resistant, but was not assaultive… more force than necessary.”

Chief Freeman – who took over the department following the incident – says he wants to be transparent and maintains that after reviewing the case he determined, “Fraser had several opportunities to de-escalate his encounter with the drunk 19 year old, but instead he escalated it needlessly.”

“[What he did] does damage to the reputation of law officers, not only in this community, but across the nation,” Freeman added. “We see it time and time again.”

Fraser, a 17-year police employee, was fired in July. He was charged last week with aggravated assault and violation of oath by a public officer. After turning himself in, he was released from the Clarke County Jail on $30,000 bond.