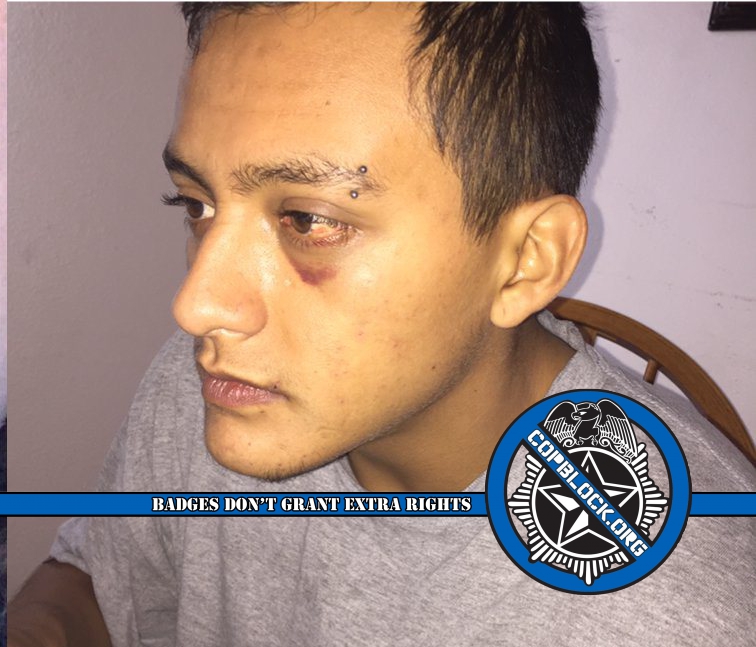 The following post and video was received from Maribel Diego, via the CopBlock.org submission page. Along with her submission, she states:

I suffer from PTSD from this incident and have taken different types of medication, but recently stopped taking them because they where making me even more anxious and depressed. We, the group of the Cop Block Network, should be the voice for everyone who’s been killed by policemen, we are one, we are all equal. One love, one step at a time, we can make change.

Cops nowadays honestly think they can do whatever they please, not until one December night did I know I would be a victim of police brutality. Late December, the night started with one of my friends Rey Carreno (who had been deployed, but was in town for Christmas ) picking me and my brother up to go out for a night of fun. We went to my cousins party and by the end of the night people got out of hand, so we decided to leave.

I don’t exactly know what these guys wanted but they had been rowdy for a while and from the looks of it they just wanted trouble. They hit my brother in the face with a vodka bottle and I lost it. I never thought I’d have to watch my brother fall to the ground defenseless and helpless I cried and cried until I threatened the guys I would call the cops. Of course, I didn’t get around to it, because I was putting my brother in the car when, out of nowhere, cops came to the scene.

I was being cooperative and told them exactly everything I had witnessed. They told me sit tight. By the time I looked over, they had thrown my friend on the ground. So I made a statement. I told them “you can’t fucking do that shit, WOW!” Not only did they yell at me “GET DOWN TOO,” but they ran up on me and slammed me on my back and began yelling “STOP RESISTING,” even though I was clearly slammed on my back. When out of nowhere, I felt multiple cops on top of me, one punch after another. “GEt THE FUCK OFF ME I’M A GIRL YOU PUSSY BITCHES” is what you heard me yelling while I was on the ground not knowing what to do helpless. I started crying even louder than before.

When they finally stopped punching me, they put me on my stomach and said, “your being arrested for resisting arrest.” I got to talk to one of the supervisors and told them he didn’t even tell me what I was being arrested for and that I had broken no law. He asked one of the three officers who attacked me what had escalated this. All Mr. Rookie Officer said is “She didn’t listen to me and wasn’t completely down.”

While the paramedics came to check on me, even though they should’ve came from the start, they didn’t even check my brother. He had a fractured eye and we only know this because his eye stayed black for months. It is still sort of darker than the other. Anyways, when the paramedics came they told officers they had to take me to the hospital to check my ribs weren’t broken, because I kept saying I can’t breathe. I was having an anxiety attack and I couldn’t do anything to help myself.

Once we got to the hospital, I started speaking my mind and told the cops what was going on in your head while your hitting me over and over again. The cops wouldn’t even look at me all they would say, “we are just doing our jobs.” Time passed and the hospital said I could leave. After all the commotion and tears, I was brought to vista detention facility, where I would be wrongfully detained for “Assaulting AN OFFICER.” I was stripped down and violated. I never want anyone to experience what I’ve been through, because its such a heartbreaking moment when you can’t help yourself in any way possible. Finally, after four days, I was released.

I had multiple court dates. At my first readiness hearing, one of the cops from that night saw me and gave me the biggest grin and said why you got that look on your face. He began to giggle and I responded “you have some nerve.” That day my public defender told me they didn’t have to read me my rights. I was shocked. I couldn’t believe this was happening to me. Not only did they not read me my rights, but the Miranda Law says you must be informed by a peace officer that you are being detained and what for.

My second court date was a motion hearing for the cops background. At this point, I had no idea what was gonna happen to them or me. My public defender said they had no prior history of police misconduct, therefore I would have another readiness hearing. Somehow, Mr. EdMen Chavez was no longer my public defender. At the next readiness, hearing I met Mr. Adam Hepburne. He told me the same bullshit; no officer actually needs to read you your rights. I wouldn’t and I couldn’t understand why. At one point, my voice got loud and he told me okay, okay calm down. That’s when I knew he didn’t actually care that I was abused by the cops.

During the second readiness hearing, he told me I would have to go to trial because I wasn’t taking their deal, even though I kept asking for the dashcam videos. I wasn’t going to admit to anything I never did, their deal was resisting and delay of investigation. So, basically they dropped the assaulting an officer charge. Why? Because they knew I didn’t do anything, but courts are supposed to convict people. So they kept on keeping on with their deals. The day of the trial they gave me a new deal “disturbing the peace.” I cried my eyes out. I couldn’t believe the prosecutor and public defender really wanted to convict me for anything and they didn’t care what they had to do. I kept arguing the dashcam videos will show you guys what really happened.

When it was time for the policemen to get cross examined, I broke down. I thought I was being set up once again. They began talking about distraction blows and how they had to do this over and over again because I was just so “strong.” Officer Timothy Ricci actually stated he thought I knew karate. I couldn’t believe they were lying about everything to make themselves look good. The second cop came up and stated that he checked around the neighborhood for the guys who hit my brother, when in reality he never left the scene from the moment they got there. They kept trying to make themselves look like they actually wanted to help the situation.

Not only did they not release the dashcam videos they also “forgot” to turn on their mic. They didn’t allow me to show the jurors my personal video of that night. My friend began to record the first boy being thrown down, that’s obstruction of justice, they messed with the evidence and made the whole trial unfair. When I got crossed examined they barely asked me any questions and kept saying objection your honor lacks of foundation. Everything I was attempting to answer they wouldn’t let me say it. They weren’t letting me speak, they didn’t want the jurors to know what I felt or what I had experienced. Then the public defender and prosecutor started their argument. The prosecutor (I forget his name) insisted that I had committed a crime way before any cop even touched me, even though he never actually stated the law that was broken. After I got cross examined, I knew in my gut I was going to get fucked over. Not only had the cops manipulated the story, but while the judge read the juror instructions he repeated everything I never did; Maribel delayed the officers from checking on her brother; Maribel assaulted one of the officers; blah, blah, etc… I couldn’t believe they where doing this to me in front of my face.

The trial took over five days. They finally got a verdict and found me guilty on all three counts; assaulting an officer, delaying an investigation, and resisting arrest. I couldn’t believe it, I cried and cried. This was not justice. I had a court hearing coming up and talked to a probation officer. I explained to her that I’ve been working since the age of 18 and I didn’t feel as if I broke any law. I told her that the cops need to stop beating people. All she said is its been happening and since you lost trial you have to suffer consequences. I cried. She said it might be just summary probation, but the judge can ask for custody. I was surprised. They where basically telling me I might go to jail, after all. Seven months of going back and forth to court for me getting mistreated by cops.

The day of my court, the judge asked if I learned my lesson. My public defender had already told me before I entered the room I would most likely be taking 20 anger management classes, because the probation report came back good, but that there was a chance that the judge may still ask for custody. When the judge began to talk, he said I had credit for eight days of jail, when I only served four, but I wasn’t going to argue with that. They waived my fines and only sentenced me to three years informal probation – NON 4th waiver – which means i still have my 4th amendment right and can never be checked without probable cause. I can’t own a firearm for ten years.

I thought to myself this is the justice system of the United States of America, when they know for a fact I didn’t do anything, but can still label me a criminal. It’s sad in so many ways I can’t even explain. America needs to wake up and see that cops are also people who break the law.