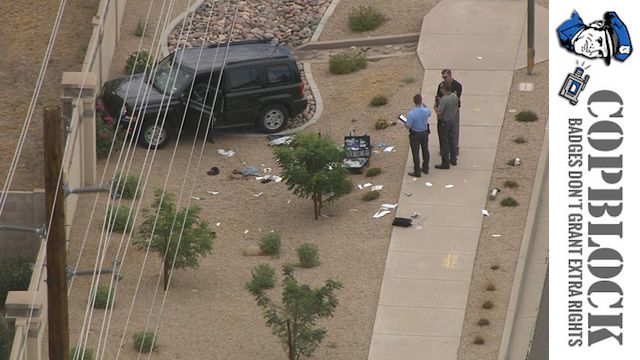 I have a pretty keen eye for picking out the police killings that do not seem to add up, often before anyone else publicly announces their own skepticism. The recent police killing of Zachary Hammond, of which the question was recently posed by mainstream media- “Where’s the Outrage?”, was one such case of my ‘police lied’ power of prediction. Whether or not the cop who killed him is brought to justice really doesn’t change the fact that the justification for killing him was not only illogical, but also in defiance of basic elementary physics. IE: The cop responsible lied. Well my bullshit sniffer went a little wild when I read the next story, so lets you and I investigate some facts and see if once again, the law enforcement claims do not add up.

On Monday August 10th, 2015, Richard Tyler Young was pulled over for speeding in a school zone near Patterson Elementary School in Gilbert, Arizona. While the motorcycle cop who had pulled him over was writing the citation, he claims Young was making ‘suspicious movements’ inside of his car. “suspicious movements’ is one of those terms that is so thoroughly and arbitrarily subjective that right off you know the story is going to be problematic.

The police claim that when the officer, who has not yet been identified, was approaching the side of Young’s car, the driver put it into reverse and backed up; supposedly knocking the officer and his bike over. Gilbert PD claims that Young then ‘sped at’ the officer, who was then forced to open fire on him.

The officers shots connected and Richard was soon pronounced dead at a local hospital. No officers were injured.

Alright, ready to pick some inconsistencies apart and look for the lies hiding beneath them?

Look at the pictures of the scene embedded in the photo gallery above. Do the physical realities of that environment lend to the Gilbert Police Department’s story? You first have to make the logical leap that there was reasonable motivation for the actions of Young being claimed. And even once you get past those, the other facts are so hokey that it is nearly impossible to sum this scenario up in the manner that the official story has attempted to do.

Now add to this that the officer was recklessly firing his service weapon near a school full of children, which might piss people off if there wasn’t a ‘very good’ reason, and not only do the facts seem to lean against the official narrative, but the motivation for police to lie skyrockets.

So once again, before mainstream media or others are willing to touch this story because they are beholden to law enforcements lies, I am going to call shenanigans. This story does not add up. Not intellectually, intuitively; not using science or psychology- and certainly not in the context of a time in history in which police brutality, killings and lies are more rampant than the likelihood of impossible scenarios always mysteriously occurring in police presence.

What really happened, Gilbert PD? Are you going to lie to us like we are stupid monkeys who cannot discern any of our own truths from facts, or are you gonna act like an adult and come clean about what really happened? If your officer made a stupid mistake or miscalculated the situation, then let them stand before your system of justice and be judged, but for you to feed such obvious lies on his behalf degrades everyone wearing a Gilbert PD badge. And as you join the growing number of police departments who have sullied their own reputations, those police badges in general are being grotesquely represented by a growing chorus of law enforcement corruption, brutality and lies.