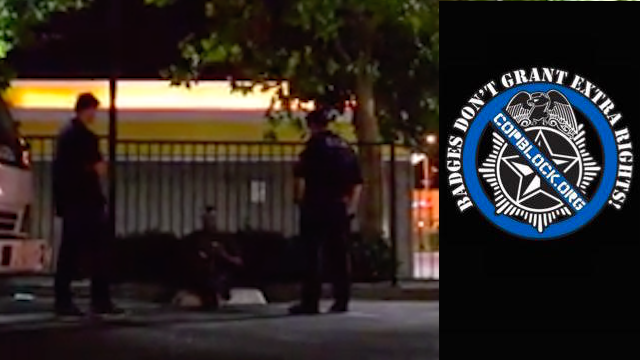 I was out Sunday night filming the cruise in Fresno, CA when I happened upon a cop and his ride along detaining a man in the dark entrance of a hotel. I stopped and began filming. The officer and i had a verbal exchange about watching the police. The detained man then went on a little monologue about police corruption. A few minutes later another officer showed up and the first cop walked over to the hotel office.

When he returned he searched some random truck and checked the area for anything illegal he could attribute to the man he stopped. Eventually they frisked, and searched him. To include making the man remove his shoes. I did chuckle when he offered the cop one of his socks for inspection.

Near the end 2 more cops rolled up, but stayed in their car, bringing the total officers present to four. You won’t be seeing them in the video as my Nikon only records ten minutes of video at a time, and if I’m not paying attention, it will stop.

The stop concluded with the man being let go, and the cops leaving.

I was disappointed to see these law enforcement officials working so hard to criminalize this person who to them was a complete stranger. They had no probable cause, and no reason to violate this mans self ownership, but due to the fact that he was on probation they are able to stop and harass him at any point and he has to consent or he will be caged again.

I talked to him after the stop, and gave him some Cop Block cards for the next time. He kept telling me he was on probation and he had no rights. Again it was troubling for me to experience someone who had resigned themselves to the idea that their rights were a gift from the state, and due to previous action they had none.