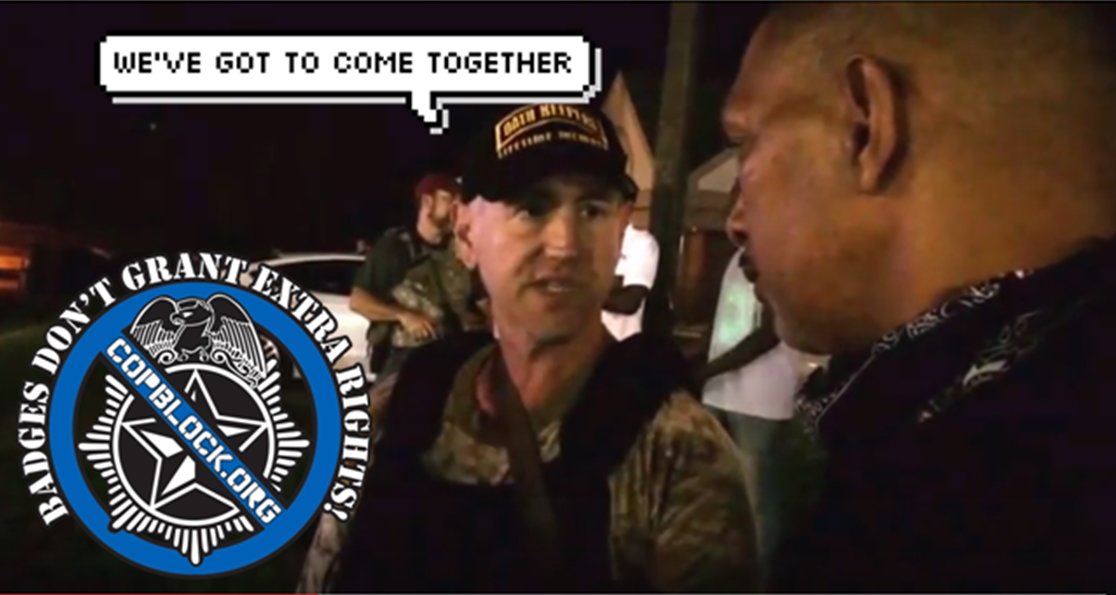 Protestors continue to gather in Ferguson, Missouri for the one year commemoration of the death Michael Brown – but they aren’t the only ones returning to the area.

Described as “fiercely antigovernment [and] militaristic” by some, the controversial group Oath Keepers refer to themselves as a “non-partisan association of current and formerly serving military, police, and first responders who pledge to fulfill the oath all military and police take to ‘defend the Constitution against all enemies, foreign and domestic.'”

Members of the organization armed with assault rifles, bulletproof vests and camouflage gear began arriving in Ferguson early Tuesday morning, NBC News reports, following an act by St. Louis County authorities declaring a state of emergency in the city after police exchanged gunfire with protestors and more than 100 people were arrested on Monday.

Already, mainstream media outlets and limp-wrist local police officials are condemning the presence of the group.

St. Louis County Police appear to be looking for reasons to confront Oath Keepers, and say they are consulting with the St. Louis County Prosecuting Attorneys Office about the issue of open-carry.

The city of St. Louis was among several municipalities in Missouri that had prohibitions against open-carrying a firearm until a voter-backed amendment passed in the state last year making it legal with a permit. The measure even went as far as to invalidate the existing municipal bans against it, legal experts say.

The revised statute states that anyone permitted to carry a gun can “briefly and openly display the firearm to the ordinary sight of another person, unless the firearm is intentionally displayed in an angry or threatening manner.”

“There is no exception for a state of emergency for these laws not to apply,” St. Louis University Law School Professor Marcia McCormick said. “Clearly the people who are carrying these weapons are trying to send a message that some might see as threatening but it’s probably not a violation of the statute.”

While being met by some resistance from the “Black Lives Matter” movement for being armed “uncommissioned white citizens in a black community,” Oath Keepers are taking the opportunity to educate protestors about their Second Amendment rights, and say they also intend to protect businesses and reporters from the kind of violence that broke out in the city last year.

It seems odd that protestors with “Black Lives Matter” would deride an organization like Oath Keepers – who has a history of protecting black-owned businesses from being destroyed in Ferguson in the past – but as a social media firestorm sounded off on Tuesday, tweets and headlines alike chastised the group as “racist, white gun owners” who need to “check their privilege.” In December, members of the organization took positions on rooftops and in the streets of the city to protect local businesses – after police refused to – from mostly out-of-town protestors, who were burning the buildings to the ground.

In response to the acclaim from business owners, police set up a three-man sniper team in a nearby building before aiming their rifles directly at the voluntary security forces while they were positioned atop a bakery.

“Not only [were the business owners] asking us to stay, more businesses [we]re asking us ‘do you have more men, can you guard our business too?’ and so the business owners didn’t want us to leave,” St. Louis Oath Keeper member Sam Andrews said at the time, adding that the residents had came to believe that police had failed them.

Latter, police would even attempt to use a local statute regulating the provision of private security to have Oath Keepers removed from the city, but after it was pointed out that the ordinance describes a security guard as a person who is “employed,” the volunteers were back serving the community.

“Once we read the statute, we laughed at it,” Andrews said. “Then, the next night, we were there.”

The events in December assuredly left a sour-taste in the mouths of local officers who no-doubt felt one-upped by a voluntary market solution that raised questions about their competency – but since Oath Keepers arrived again in Ferguson Tuesday – their mission has not appeared to be one of protection, but one of education and unity instead.

In footage filmed from the scene, an Oath Keeper can be seen speaking with local protestors about taxation, corrupt politicians, and the need to unite in opposition to the encroachments of a tyrannical government.

“As long as we are divided as a community, we can’t fix these problems,” the man says. “We’ve got to come together. We gotta stop the hate, watch each others back… and demand that these crooked lawyer politicians – career politician lying lawyers – that are stealing from all of us, leave office, and put some real people in. That’s how we fix the problem, we come together.”

I don’t know about you, but that certainly sounds like a message that I can get behind. Predictably however, police and officials disagree, and will further seek to divide and conquer us along racial lines in order to consolidate greater federal control over law enforcement.

It is unclear how long Oath Keepers plan to stay in Ferguson.

Their website outlines a list of 10 “Orders” members will not obey. Among them include orders to disarm the American people, conduct warrantless searches, blockade American cities, or infringe on the right of the people to free speech, to peaceably assemble, and to petition their government for a redress of grievances.