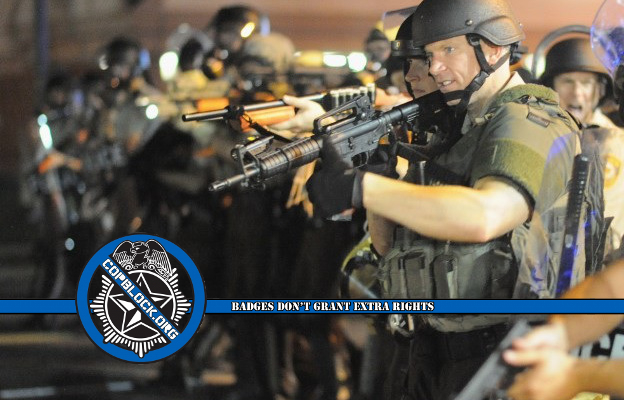 Unless you’ve literally been cloistered in a cave for the last year, or you’re just one of those people who are completely clueless about the world around them, then you know about the murder of Michael Brown. But here is the short version of it anyway: A black man named Michael Brown was gunned down in the middle of the street while unarmed (and according to some in the act of surrendering, though no credible witness could confirm the claim) by Darren Wilson, a white cop in the Missouri town of Ferguson. Wilson was not charged with a crime after the evidence went to a grand jury, while the town of Ferguson erupted in protests that included rioting and looting and a massive military-like police response.

One year later apparently nobody has learned a thing because nothing has changed, the police state continues to grow, another man is dead at the hands of police, and protests have sparked again, resulting in more than 140 arrests, including the arrests of prominent activist figures like Cornel West who purposely went to Ferguson so they would be arrested for their civil disobedience.

Let me give you some of the current headlines in no particular order of release, and then we’ll talk about some of the more important points:

Tyrone Harris is the young man (MSM loves to say ‘teenager’ for the emotional response) shot by police detectives this past weekend shortly after he was in a gun fight with other unknown individuals where witnesses say as many as 50 shots were fired. A couple of snippets of video, from RT and a surveillance camera, show Harris run into the scene right after shots are first fired: He initially is moving away from the direction the shots are fired but he abruptly stops, reaches behind his back, under his shirt, and pulls out what appears to be a pistol.  He then runs off in the direction of the gunfire with the pistol in a depressed (low) ready position.

Harris, who was already up on felony gun charges, had recently graduated from the same high school as Michael Brown and according to Harris’ father, who “think(s) there’s a lot more to this,” the two were “real close.” That former point is what seems to be the impetus for many to spark a flare-up in protests by insinuation and inference that there is a conspiracy within the Ferguson police department regarding the Michael Brown murder.

So what can we learn from this? Not a damn thing. While I believe that the death of Michael Brown was unwarranted and thus I call it murder, I don’t think the death of Harris meets the criteria. Brown was an unarmed man who strong-arm robbed a convenience store:  criminal, sure, but not worthy of a death sentence, and certainly not worth being shot by some pig on the street. Harris, on the other hand, was an armed, admitted felon shooting in public, including at police, apparently, and on a path of self-destruction that ended rather predictably, I’m afraid. One could make the argument that Harris is dead because of police, but it’s a weak argument that goes something like: “If they hadn’t killed Brown in the first place then there would be no one-year anniversary to protest so, no gunfight.” The only problem with that argument is that the gunfight was looting-related, a crime of opportunity not directly related to the reason for the larger protest. That is to say, it’s not like it was a conflict between police and the people fighting over the circumstances of the death of Brown or subsequent abuses of civil rights.

Believe it or not, there are more important things at stake here than the actions of one criminal or the criminals who killed him, a bigger picture that keeps being missed in all of this which-lives-matter rhetoric. While cute little slogans with a hash tag make for great banners and headlines, something like #blacklivesmatter completely misses the point unless that point is to serve to foment racial divide. So far this year cops have killed twice as many whites as they have blacks and are on pace to outstrip last year’s number of 1,100 people killed by police. And all of those people regardless of color had one thing in common:  They were poor and or ‘lower class’ working citizens.

Police violence is not a racial issue, it’s a systemic class issue.

The police are an unworthy, uncontrollable, un-trustable special class of citizen providing private security and commercial code enforcement for The State, which gives them privileges inconsistent with the application of equal justice. They are given implements and strategies of war to use as tools in dealing with domestic scenarios and the people are treated like enemy combatants instead of criminals or persons in need. If you or I were to respond to minor domestic issues with the cavalier jack-booted thug approach that most police do on a daily basis, we’d be locked up as a menace to society. But, day after day, death after death, our police become more violent toward a less violent population and grow more distant from the altruistic hometown hero protecting property and his neighbors. The police have become the standing army the Founders warned us about, an occupying force the likes of which they rebelled against.

There’s a big to-do about DNA collection; while this is an abhorrent practice, it is easily dealt with through the legal system. If you are not convicted of a crime then you can demand that the state destroy your DNA sample. The argument surrounding this DNA collection, yet again, deals with the immediate current hot story for the spotlight it receives instead of cutting to the heart of the systemic problem:  The government should not be collecting DNA at all unless a direct application of the DNA evidence can be used to resolve an actual crime, and then only after a complainant swears his oath and makes a case for seizing the DNA to a judge, who then signs off on a warrant. This process is consistent with the protections from the state codified in the Bill of Rights, and affords a legal review of the case before seizure while simultaneously placing accountability for mistakes on those who swore the case, regardless of their special classification as an authority. Protesting a corrupt state is not a crime, except to a corrupt state.

The headline with the most traction in the MSM, aside from “cops kill another black teenager,” was dealing with the presence of four armed Oath Keepers, members of a group of former and current police and military who swear to The People that they will uphold the letter and spirit of The Constitution. Or more accurately, that they will not violate the natural rights of The People, as codified as civil rights, in the Bill of Rights (I know it’s a mouthful but the distinctions are important).

From the Christian Science Monitor to Reuters right on over to CBS (which misrepresented the facts of the the OK’s presence by posting a now-retracted story claiming that Infowars.com hired them to protect their reporters), the media painted the armed men as a great threat to order. Now I, on a very personal level, am no fan of Joe Biggs, the Infowars.com reporter and former murderer for the state, who admits to calling his local Oath Keeper buddies to protect Jakari Jackson and himself on the streets of Ferguson, and did so for no other reason than previous experience in Ferguson where police blatantly shot at Infowars.com’s and other reporters, who found themselves in the crossfire of protesters and the state’s enforcers.

Oath Keepers in Ferguson last year were praised by many, including members of the black community, for helping to protect property from looters. But here we are again at a missed point. While the MSM pushes the argument that these men are criminal agitators in a time and at a place of civil unrest, the fact that we all have a natural right to self-defense, regardless of the state of The State and the machinations of whomever is making up the current rule set, is ignored.

I’ve already drug this thing waaaaay out with so many points to cover and so I have only one more story to comment on and point to make regarding an article by everyone’s favorite race-baiter, the Reverend Jesse Jackson. His holiness (is that offensive to Catholics?) penned a piece for the New Pittsburg Courier where he is actually, surprisingly, fairly honest about the reality of police brutality.

“While African Americans are at disproportionate risk from the structural and human biases of our criminal justice system, we should not forget that working and poor people of all races suffer from police excessive use of force. Police kill more Whites than Blacks. Of the 700 killings it has recorded, the Guardian reports that 340 were White, 179 Black and 101 Hispanic. The Post reports that African American men were 40 percent of the unarmed deaths, but Whites and Hispanics made up the majority.”

Rev-Jes however loses me and most white people when he suggests that whites are silent on the subject of abuse of power by the police and should join the black people in their protesting, while failing to recognize that we are not welcome. He completely ignores the fact that to march with these people in protest is to march behind a slogan that excludes everyone but blacks and ignores the systemic problems with our police, and that to point either fact out gets you called a racist. While I fully support any positive movement to reform, or, even better, to eliminate policing and the profiteering by the state that goes with it, you will not find me on the ground at any #BlackLivesMatter event because I’m not black and I don’t have, nor should I have, any pangs of white guilt.

If you want to know more, copy the headlines up there in to your browser or favorite search engine; the following are the main links I used to compile my facts (plus some).  And check out this piece from Pete Eyre Dear Ferguson Residents Stop Funding Your Oppressors for a great step in defeating the out-of-control police state. Furthermore, I suggest following the Midwest Tri-State Area Cop Block Facebook page because they are on top of all things Ferguson.