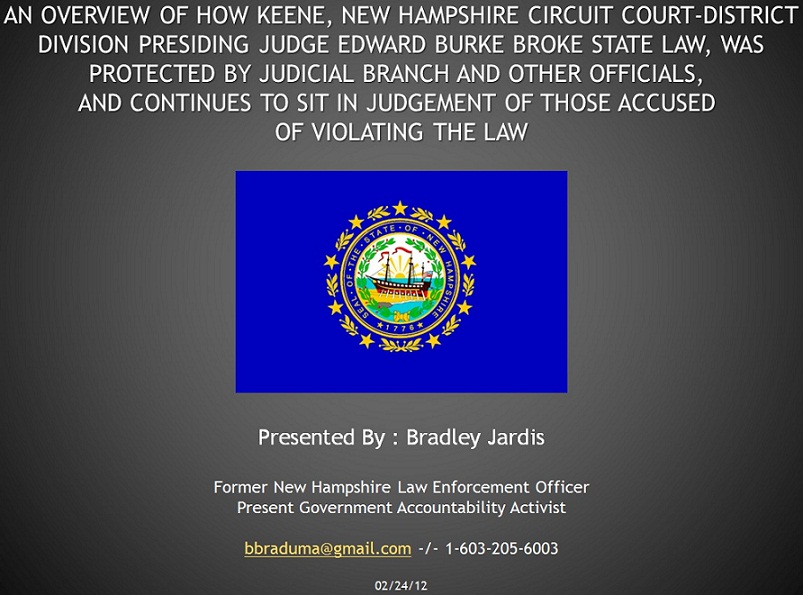 On Friday I am commissioning my first ever official “overview” of government misconduct. The presentation will detail my case as to precisely how Keene Circuit Court-District Division Presiding Judge Edward Burke violated state law, the state Constitution, and judicial canons by telling a lie to have someone arrested. A lie that constituted False Reports to Law Enforcement, a crime under state law. A crime that if the exact facts and circumstances were brought before him in a criminal case where you did the same thing, he would find you guilty.

I am quite familiar with the crime as I have arrested people and prepared prosecution cases for it before. Judge Burke should have been arrested by now for what he did… but lucky for him, it appears that his friends in government are protecting him.

The presentation I will be burning to DVD and distributing to Governor John Lynch, the Executive Council, and every member of the New Hampshire General Court. Every mainstream media outlet in New Hampshire will also be receiving a copy.

Judicial Canon #2, the code of conduct for judges, reads as follows:

I presume that includes impropriety and the appearance of impropriety in all of the judge’s interactions with members of the free press who are asking constitutionally protected questions.  Especially when our own Constitution says:

FREE SPEECH AND LIBERTY OF THE PRESS ARE ESSENTIAL TO THE SECURITY OF FREEDOM IN A STATE: THEY OUGHT, THEREFORE, TO BE INVIOLABLY PRESERVED.

(not taken away in a creative attempt to cover up a criminal offense against CopBlock.org founder Ademo Freeman which clearly resulted in his constitutional rights being violated)