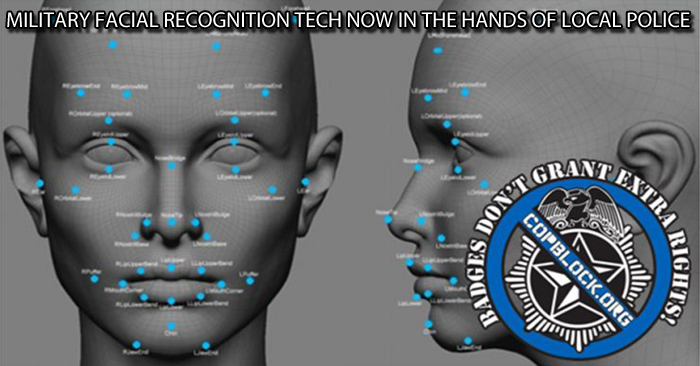 According to a new New York Times report, facial recognition software utilized by intelligence agencies and the military is currently being imported from places like Iraq and Afghanistan to local United States police departments.

Originally utilized to identify terrorists, the Times reports, the technology has currently been adopted by dozens of police departments around the country to track voluntary traders like drug dealers, prostitutes, and other victimless “criminals.”

The software works to determine the distance between a suspects eyes or the shape of their lips – and is able to identify over 16,000 distinct points on a face. The technology then compares the points with thousands of other similar points in booking and other photos at a rate of more than one million faces per second.

Cities that already use facial recognition technology include New York and Chicago – which has the technology connected to 25,000 surveillance cameras that can analyze photos in real time.

San Diego however, the Times says, is at the forefront of utilizing the software. There, beat cops, detectives and even school resource officers are using hand-held devices to create a photo database of tens of thousands of people – usually without their consent.

San Diego Police Lt. Scott Wahl said the department has no written policy regulating facial recognition software, does not train officers on its lawful use, or require police officers to file a report when they use the equipment in an incident that does not result in an arrest.

“It is a test product for the region that we’ve allowed officers to use,” Wahl said. “We don’t even know how many are out there.”

Documents show that over a 33 day period in January and February, 26 San Diego law enforcement agencies used the software to try to identify people on more than 20,600 occasions – with officers only finding a match around 25 percent of the time.

In Oakland, after being pressured by residents, the City Council reduced plans this year for a federally financed center that would have linked surveillance equipment around the city, including closed-circuit cameras, gunshot microphones and license plate readers.

The city also formed a committee to limit the use of the equipment and develop privacy standards – which will regulate how long data can be kept and who can access it.

In Boston, facial recognition technology has been tested but the city decided in 2013 not to adopt it, after angry residents found out that the software had been linked to surveillance cameras to secretly scan the faces of thousands of people at outdoor concerts in the city.

Public reaction is not stopping the FBI from pushing ahead with the technology however.

The agency is currently developing a $1 billion Next Generation Identification biometric program that will gather data like fingerprints, iris scans, DNA profiles, voice identification records and photographs, as well as information gleaned through facial recognition software.

The federal technocratic apparatus is even capable of analyzing images from driver’s license photos and will be plugged in to tens of thousands of surveillance cameras around the country.

It will eventually be made accessible to more than 18,000 local, state, federal and international law enforcement agencies and will include people who are not criminal suspects in the database, the Times says.

The error rate for the software is as high as 20 percent.

The American Civil Liberties Union says facial recognition software is easily tripped up by changes in hairstyle or facial hair, by aging, weight gain or loss, and by simple disguises.

A study of the technology by the Department of Defense found very high error rates including both “false positives” and “false negatives” even under ideal conditions.