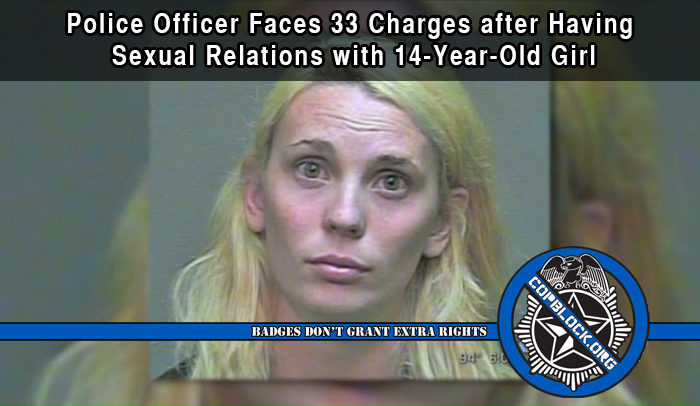 A former Oklahoma police officer has found herself behind bars after being caught having inappropriate sexual relations with an underaged child in late July.

Courtney Breanne Schlinke, who was employed at the Valley Brook Police Department, has been charged with 16 counts of First Degree Rape by Instrumentation, eight counts of Oral Sodomy, and nine counts of Indecent and Lewd acts with a Child. The grandmother of the teen, Jeanne England, went to Oklahoma City Police on July 1st to report the suspicious messages and photos between her granddaughter and officer Schlinke. England said that she had been suspicious about the relationship for at least a year, but investigators say there’s no telling how long it actually occurred.

“We know that it transpired during the course of this last year, but it could have gone on even before then,” Police Capt. Balderrama stated.

Police Chief Michael Stamp of the Valley Brook police said that Schlinke had been employed at the department for just a few months and was working on getting CLEET certified before she resigned for personal reasons.

“This doesn’t define who we are. You know, it’s unfortunate. We have a good group of people here. We have good city leaders here. We are all focused on change and positive change and those things are going to take time,” Chief Stamp said.

The Oklahoma City Police are no strangers to corruption.

A former Oklahoma City police officer, Daniel Holtzclaw, is currently facing 36 charges of felony rape, lewd exhibition, forcible oral sodomy and sexual battery after investigations revealed that he had used his authority to force victims to have sex while on patrol in 2013 and 2014.

In 2011, the former Valley Brooke Police Chief, Melvin Martin Fisher Jr., was arrested on charges of drug trafficking and possession after being caught with over 20 grams of methamphetamine and paraphernalia.

“Obviously it shines more negative light upon us,” Chief Stamp said. “Certainly, if we would have seen something like this, you know if the facts come true, she wouldn’t have been hired. But there was nothing in her background that would keep her from being a policeman,” Chief Stamp continued.

Former officer Courtney Breanne Schlinke is now being held in the Oklahoma Jail on a 1.1 million dollar bond. The underage victim is now in therapy.