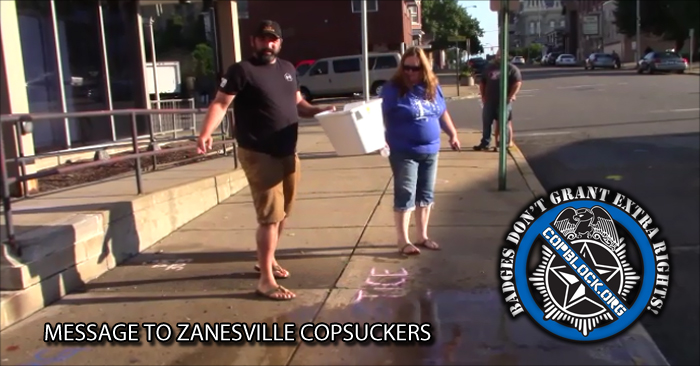 A few anti Cop Block people showed up for Herb’s trial in Zanesville. When Ademo and I got there, they wanted to talk. A few of them even thought that Ademo made some good points talking to them.

But then some of them showed up the next day at trial and the niceties went out the window. We had a woman named Deb that thinks that if it offends her it should be illegal. (That video will be coming soon, as well.)

Below you can see the raw video from the night before Herb’s trial and the semi-civil conversation that accompanied it. You’ll all be happy to know that nothing happened at the trial and Herb lives to record another day. Enjoy.

They then showed up at Herb’s trial full of piss and vinegar. The energy was much different from the night before. One of them came and asked us to watch our language with his copsucker niece around. I told him to keep her out of earshot of our free speech. Our rights are not to be curtailed because it hurts your feelings.

If you want to keep your niece safe from other people’s free speech, then stay in your home and do not watch television, listen to music, or read anything but old Mark Twain. Even with Twain there may be a shit or an ass in there somewhere. Even the bible you hold so near to your hearts has cuss words in it! More importantly, if her parents left her in your care and you are supposed to be the responsible guardian, and you are worried the parents will yell at you for exposing her to it, that is your fault! Act like the responsible adult you preach to everyone else to be and get the kid out of there!

In the end, I have the freedom to say what I want, when I want. If you don’t like that, I suggest you take the advice you give to us all the time and leave! Change of attitude and a message to Zanesville Copsucker Jeremy Starcher in the video below.