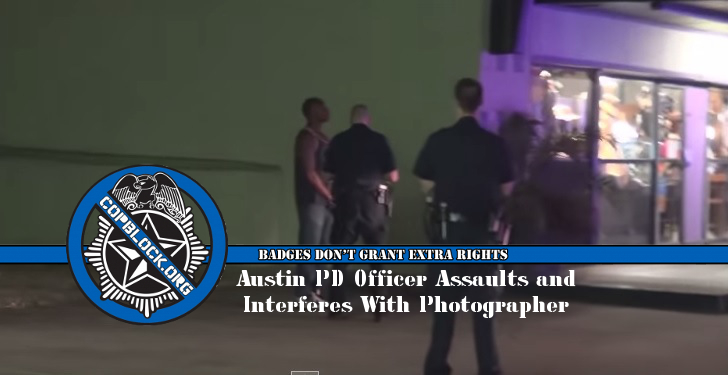 With the amount of negative press that officers from the Austin Police Department are getting these days, one would think they would do everything they could to change their public image.  However, in yet another video by The Battousai they continued to demonstrate their hate for people exercising their constitutional rights.

Batt was filming a traffic stop that led to a DUI investigation.  He was filming from a public sidewalk, was over 30 feet away from the scene, and was not interfering with the officers at any time.  The stop began with just one officer and the driver being investigated.  Once the officer saw that he was being recorded, four more officers soon rolled up on the scene.

Throughout the video, another officer; Officer Allegretti Badge #7756, keeps looking back to see where the camera is and then moves to block his shot.  Because of this, he has to keep moving to get a shot of the scene.  Brewer tells him to quit moving around and he tells the officer that if the officer would stop interfering with his photography, he wouldn’t have to keep moving.

(b1):  In areas open to the public, officers shall allow bystanders the same access for photography as is given to members of the news.  Officers shall be aware that:  3.  Public settings include parks, sidewalks, streets, and locations of public protests; but that protection extends also to an individual’s home or business, common areas of public or private facilities and buildings, and any other public or private facility at which the individual has a legal right to be present.

(c) As long as the photographing or recording takes place in a setting at which the individual has a legal right to be present and does not interfere with an officer’s safety or lawful duties, officer’s shall not inform or instruct people that photographing or recording of police officers, police activity or individuals who are the subject of police action (such as a Terry stop or an arrest) is not allowed; requires a permit; or requires the officer’s consent. Additionally, officers shall not:

1. Order that person to cease such activity;

3. Demand that the person state a reason why he or she is taking photographs or recording;

5. Intentionally block or obstruct cameras or recording devices; or

6. In any way threaten, intimidate or otherwise discourage an individual from recording officer’s enforcement activities.

Several of the officers present seemed to interact professionally with Battousai, but it’s quite apparent that Officer Brewer and Officer Allegretti are in need of retraining on the department’s policy when interacting with the public.  If these officer have nothing to hide, why do they seem to lose their minds every time a person films them?

The Battousai is a real professional when dealing with officer when he goes out and films them.  He is always polite and never puts himself into the situation.  His only interactions are when they approach him or when they are finished with their stop so that he can get names and badge numbers.  Don’t let his being polite confuse you into thinking it’s weakness.  This man knows the local laws and does not back down when one of these officers tries to challenge him on his actions.

Check out some of his other videos below:

Battousai also included the link to a story involving field sobriety tests that you may find informative:  Passing a Field Sobriety Test