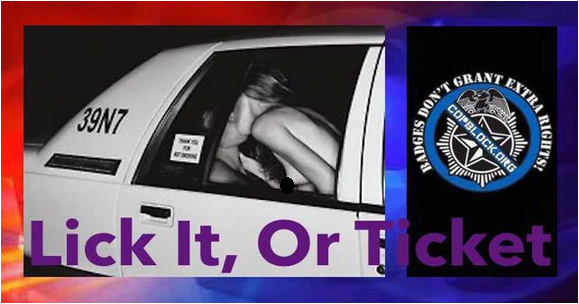 A (now) former Harris County [Texas] Sherriff’s Department, Precinct 15 Constable K9 deputy, who has yet to be named, is facing charges pending the results of an investigation into allegations that he traded leniency for sexual favors. The sexual acts, often using threat of citation or arrest to extort the female subjects, took place right inside of his cruiser.

The officer was fired a week earlier for dishonesty and misconduct after it was discovered that he was falsifying information in written and radio reports.

The new investigation began with allegations from a woman who claims that the officer used his position to take advantage of her in a sexually inappropriate manner. An investigation into that officer has involved a review of his daily routines and professional activities. They are checking on calls he responded to and traffic stops that he made to find out if his behavior with this woman is part of a larger pattern.

WLS-TV ABC7 reports that– “Sources say there’s fear other victims may be out there.”

The officers name, evidence or any more information will not likely be released before the investigation is wrapped up, if then.

In cases like this, where an officer is found guilty, the charges are usually pretty minor. Rare is it that an officer is charged with a sex crime or anything which would have long term negative effects. In comparison, if an 18-year-old were to sleep with an individual two years younger they might face lifelong consequences after being put on a registry for sex offenders, even though throughout most of history and still in many places that would be completely normal behavior. However, in our society, we consider the power imbalance between minors and legal adults (a disturbingly arbitrary designation) to be so important that we condemn the act of ‘statutory rape’ even when it is consensual.

The power imbalance between an armed officer of the law and an ordinary citizen is a far wider gap that that between your average two teens of a few years difference. Using the power vested in you by authority to coerce people into sexual acts is a far greater violation of an individual than statutory rape or even other minor ‘sex crimes’ that can ruin your life. Yet time and again officers who use their authority to take advantage of citizens to gain sexual favors will walk away from the incident with some embarrassment and a slap on the hand. Rarely will they see consequences that are in line with the spirit of the law in a way that ordinary citizens of inarguably lesser offenses do.

It is not enough to take criminal cops off the streets then send them on their way with a slap on the wrist. If they are not to be held accountable to both the spirit and letter of the law in the same ways as ordinary citizens, then it is not justice, but a circus, and you and I are the caged animals.