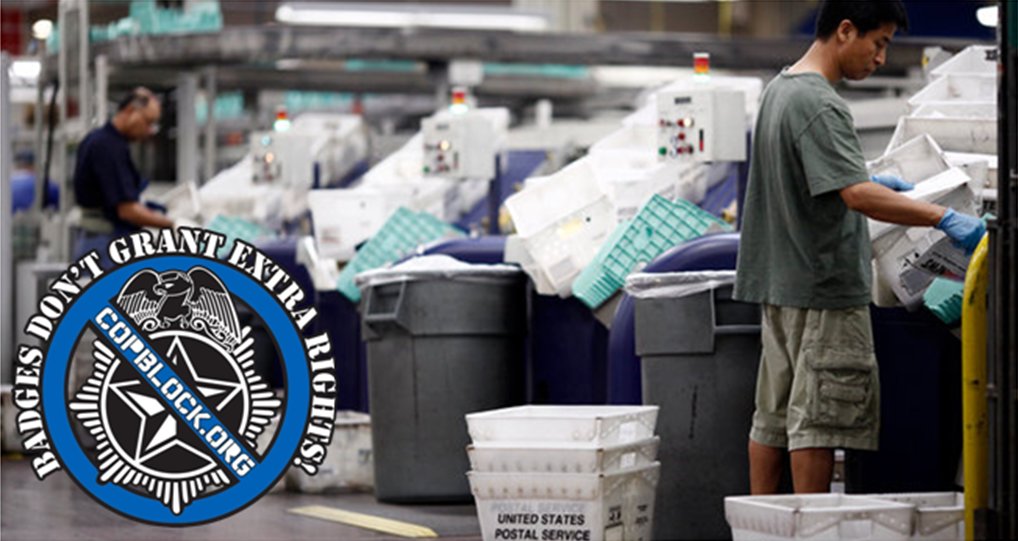 The United States Postal Service has been compiling a database of every Americans’ mail records into a dragnet being made available to law enforcement agencies on command.

Now, an unredacted version of the audit, obtained by the New York Times, sheds more light on the program.

Under the program, a copy is made of every piece of mail sent through every post office. The images are then stored in a database to be at the disposal of law enforcement agencies who might need them at a later date.

Though postal officials are not allowed to open mail and investigate its contents without a warrant, the data being collected allows law enforcement and other government officials to monitor to whom and where every individual is sending mail.

Mail cover is defined by the Internal Revenue Manual as:

The process by which a non-consensual record is made of any data appearing on the outside cover of sealed or unsealed mail; or by which a record is made of the contents of any unsealed mail, as allowed by law, to obtain information to protect national security; locate a fugitive; obtain evidence of the commission or attempted commission of a crime; obtain evidence of a violation or attempted violation of a postal statute; or assist in the identification of property, proceeds, or assets forfeitable under law.

As mail cover does not involve the reading of the mail but only information on the outside of the envelope or package that could be read by anyone seeing the item anyway, it is not considered by court precedent to be a violation of the Fourth Amendment.

At a November 19 hearing before the House of Representatives, USPS Deputy Inspector General Tammy Whitcomb indicated that the agency she oversees approved 99.8 percent of last year’s 6000 outside requests by government officials for citizens’ mail records,  the Washington Post reported.

A redacted version of the audit presented at that hearing noted that, in 13 percent of cases, the mail records requests were approved for inappropriate reasons. 20 percent of the requests were honored without approval from higher-ups, and officials ignored guidelines requiring them to purge records after an expiration date and conduct yearly reviews of the program.

According to SFGate, the U.S. Postal Service approved around 50,000 total requests for citizens’ mail records, including probes by federal, state, and local law enforcement agencies and internal queries by USPS officials last year.

According to the Times, experts say the unredacted audit is the first to provide public details about the program and discloses that the FBI, the Internal Revenue Service, the Drug Enforcement Administration and the Department of Homeland Security are the largest overall users of mail covers – though it is unclear to what extent.

In addition to raising privacy concerns, the audit found that the Postal Inspection Service does not have “sufficient controls” in place to ensure its employees follow the agency’s policies for handling mail covers – and revealed that about 10 percent of requests did not include the dates for the period covered by surveillance, leaving auditors unable to discern if the Postal Service had followed proper procedures.

Additionally, the Times says, 15 percent of the inspectors who handled the mail covers did not have the proper nondisclosure agreements on file for handling classified materials – and in about 32 percent of cases – postal inspectors did not include, as required, the date on which they visited facilities where mail covers are processed.

In another 32 percent of cases, law enforcement agencies did not return documents to the Postal Inspection Service’s Office of Counsel, which handles the mail covers, within the prescribed 60 days after a case was closed.

In response to criticisms of the mail covers program, the USPS has insisted that it authorizes the sharing of sender information with law enforcement agencies only under limited circumstances. The truth however, is that we have no way of knowing as the program has very little oversight and the tracking doesn’t have to be reported to anyone.

“I think they should have to get warrants to get this information,” ACLU and Rutgers Constitutional Rights Clinic lawyer Frank Askin said. “Law enforcement agencies shouldn’t just be able to go to the Postal Service and ask them to track someone’s communications. It raises serious First Amendment issues.”