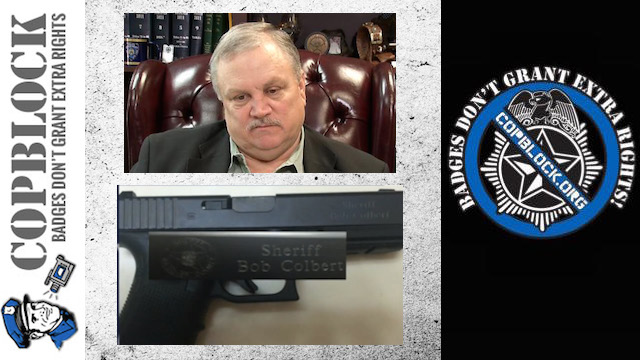 An audit of Wagoneer County Sheriff’s office has revealed a strange misuse of county funds by Sheriff Bob Colbert. A perusal of his unusual purposes indicates that he has been spending the public’s money to bolster his ego and as a sort of campaign promotion for future elections regarding his democratically secured position.

This comes following a recent misconduct investigation into the Sheriff and his department for falsifying records to indicate Colbert was attending required training sessions he did not attend, and instead, had other employees sign him in and out of the compulsory education his position entailed.

He is also under scrutiny for questions arising from $3,500 worth of money spent in undercover drug busts, of which $450 is unaccounted for.

There also remains some questions about a missing weapon, which the sheriff claims was ‘burned up in a fire’.

The most recent incident in which his spending has been called into question stems from the discovery of a purchase of hats, coloring books, coins and handguns that he had his name inserted or engraved upon. Many of these items were put up for sale, meaning his office also profited from selling promotional items, which is a violation of both county and election policies.

Yeah, he sold handguns with his name engraved on them. Let that sink in a minute.

The purchases are being called ‘unnecessary’ by State Auditor Gary Jones.

There is no mention in the local news article about the political ramifications of his actions, yet I find them incredibly troubling. Sheriffs are elected officials, so promotional items would thus be illegal use of public funds for campaign purposes.

Do you think that if Colbert is found guilty of misappropriation of funds that his political crimes will also be exposed, or will he receive the least amount of accountability as a way of one public agency profiting in publicity from another while not holding it fully accountable for the extensive nature of their crimes?

I, for one, have my doubts.