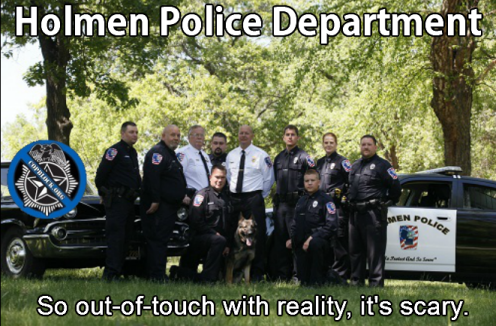 Holmen Police Department is giving themselves a big ol’ pat on the back today after one of their Facebook posts went viral. The initial post had ‘requested’ that people refrain from using profanity on their Facebook page.

Recently we posted a request that comments on our Facebook page not contain profanity as we try to promote our page as “family friendly.” Our post received a comment “Yet police aren’t typically family friendly.” While our department usually refrains from online squabbles with posters, that comment hit home and deserves a response. I ask myself why the Holmen Police Department aren’t considered family friendly, but I realize it’s possibly a general perception of police altogether? Either way… I can understand why you don’t see us as family friendly when someone in a family calls 911 because of a domestic disturbance and someone goes to jail … I suppose we’re not family friendly when we arrest someone and remove their children when they’re cooking meth in their home or dealing drugs out of their home while their children play in the next room … The police aren’t family friendly when they have to arrest a parent or other caregiver for abusing a child … We aren’t family friendly when we execute a search warrant on a house where we know someone is possessing child pornography… How more family friendly do you expect us to be? We buy hundreds of pieces of candy for Halloween night handing out to as many kids as we can.

When the author of this post states, “ but I realize it’s possibly a general perception of police altogether? Either way …”, it shows a complete dismissal of the public’s changing opinion of police departments across the country.  However, I think the most damning part of the author’s tirade is this:

I have a simple fix to your perception of how we’re NOT family friendly….how about people stop doing things that put us, the police, in situations that aren’t family friendly?

Really? We, the citizens of this Country, should stop doing things that put the police in situations that aren’t family friendly? Perhaps the Holmen Police Department is unaware that cops are 4x more likely to commit domestic violence crimes against their spouse? Or did the battered spouses put the officer’s in those situations? What about

The countless number of children raped by and abused by police? I guess that was their fault as well? You claim that police are ‘family friendly’ because they hand out Halloween candy and give tours of the PD and their squad cars. I’m sure that Officer Courtney Schlinke probably did similar to that prior to raping a 14 year old 33 times. I could only imagine the ‘tours’ that Officer James Riley Jr gave to a 13 year-old girl before he pleaded guilty to sex crimes with a minor.

I know what you’re probably thinking – Police Departments can’t be held responsible for what their officers do ‘behind closed doors’, right? Well then, let’s look at some of the other incidents that lead to the “general perception of police altogether”, as was stated by the police department.

Can you tell me what baby “Bou Bou” did to deserve being brutalized at the hands of on-duty police? I can only imagine that, under your logic, baby “Bou Bou” intentionally stopped the flash bang that was tossed blindly by police?

Do you remember Aiyana Stanley-Jones? She was a 7 year-old girl who was gunned down by police while she slept. As it turns out, sleeping is not a capital offense and she did not deserve to be executed, only to have the officer walk away free of any charges.

Unfortunately, this is the norm in police involved incidents. The lack of any convictions, despite the multitude of evidence showing guilt, is at the heart of the distrust between citizens and the police.

Physically and mentally disabled people are not immune to police brutality either. Ethan Saylor’s last words were,  “Mommy! It hurt!”.  The 26-year-old suffered from Down Syndrome and died within minutes after being handcuffed by three police officers. Doctors ruled Saylor’s death as ‘homicide by asphyxiation’. In reality, he died because he could not physically react to their ‘commands’ the way police wanted him to.

What about the multitude of unarmed people brutalized by police? Did they all ask for it? I would argue that 61-year-old Antoniette Dilorio didn’t ask to be brutalized so bad by police, that she had to be put into a medically induced coma. Ernesto Rodriguez was also beaten so badly by police, that he lost consciousness and had to be rushed to the emergency room so doctors could save his life.

Of course, these are only a few examples of the thousands of men, women, and children who have been raped, abused, or even brutally killed by police. So, I would like to ask the Holman Police Department this:  Do you completely ignore the fact that there are a lot of bad cops roaming the streets of America? Would you deny that dozens, if not hundreds, of new stories emerge every day of police brutality or corruption? If you are still confused as to why the public thinks of police as ‘less than family friendly’, please watch a couple of these videos to get back in touch with reality. But I warn you, some of the language may not be ‘family friendly‘.