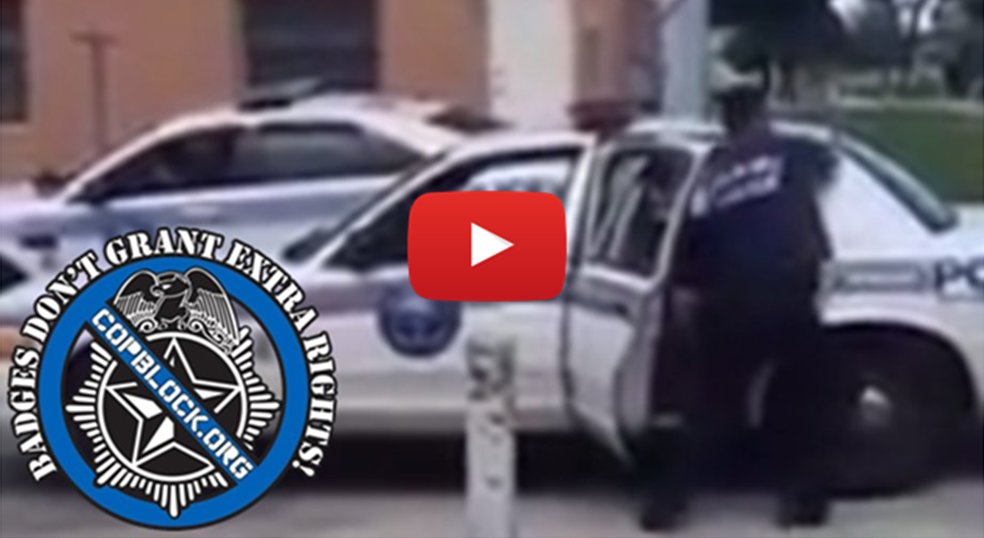 Video has emerged showing a Miami police officer assaulting an non-combative and handcuffed man after placing him in a patrol car on Thursday.

The footage, filmed on a cell-phone camera by bystander Marilyn Smith, shows the unidentified officer escorting the man to the back of the cruiser before positioning him inside and lunging into the car to punch him.

The officer is then seen wrestling with the man – who was handcuffed behind his back – as bystanders grow perturbed and other cops confront Smith for recording.

“He just looked at the other officer and hit him,” Smith said. “Then he got in the car and he just started beating him.”

“That was the officer trying to grab my phone,” Smith said. “He snatched my arm, so I snatched back.”

Smith said officers told her to delete the video or be arrested, but the woman posted it online instead, where it quickly gained attention prompting an investigation of the incident.

In a statement, the Miami Fraternal Order of Police placated the situation saying, “social media has placed a very negative tone on law enforcement nationwide,” adding that the officer was just “protecting our community.”

Additionally, the police union chastised Smith for recording and accused her of posting photos of herself on Facebook with men with guns.

“If the police officer has done something not within policy, it must be corrected,” FOP president Lt. Javier Ortiz said. “[But] here is a much more serious message by this video poster. Our community has accepted behavior that motivates violence in our younger generation. It’s time for the community to take a stand against this reckless behavior and stop the violence.”

Interesting the FOP shill would reference “stopping the violence” when the only violence perpetrated in the situation was that of a costumed thug with a badge and gun who kidnapped and assaulted a peaceful and non-resistant man.

Police have not said what the unidentified suspect in the video was arrested for but Smith says the man was detained over an apparent marijuana possession charge. He has since been released from jail.

When asked by local reporters to comment on the video, the man offered only, “the video speaks for itself. I don’t really have nothing to say.”

Miami police say the officer involved in the incident has been relieved of duty while the department investigates.